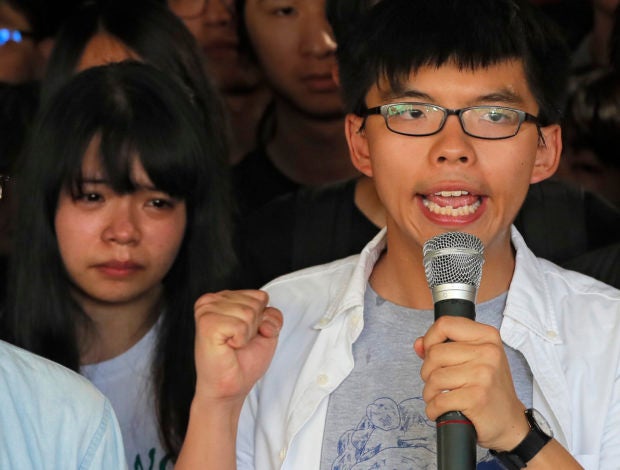 Hong Kong activist Joshua Wong, right, chants slogans as a supporter, left, reacts outside the high court before an ruling on a prosecution request for stiffer sentences in Hong Kong, Thursday, Aug. 17, 2017. Young Hong Kong activist Wong and two other student leaders of huge pro-democracy protests in 2014 braced for a court decision Thursday that could send them to prison. The three were found guilty of leading or encouraging an illegal rally in September 2014 that kicked off the demonstrations known as the “Umbrella Movement.” AP

HONG KONG—A court has overturned the earlier sentences of young Hong Kong activist Joshua Wong and two other student leaders and sentenced them to prison in connection with huge pro-democracy protests in 2014.

Last year Wong and student leader and disqualified lawmaker Nathan Law were sentenced to community service for leading or encouraging an illegal rally in September 2014. A third activist, Alex Chow, was given a suspended three-week prison sentence.

A three-judge panel on Thursday decided to stiffen those sentences and send all three to prison. Law was sentenced to eight months, Chow to seven and Wong to six.

In 2014, the activists brought major thoroughfares to a standstill for 11 weeks to protest Beijing’s plan to restrict elections in the Chinese-ruled former British colony.