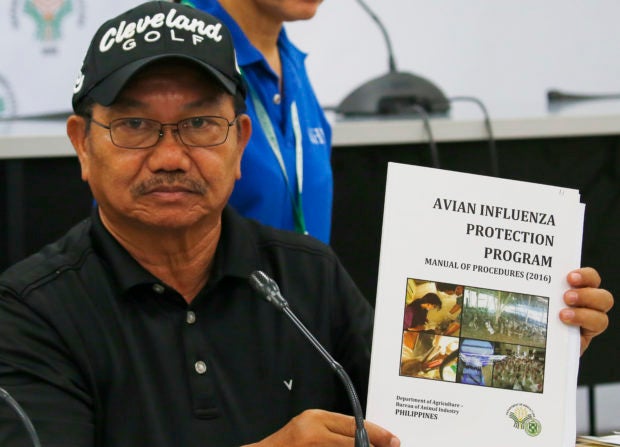 Department of Agriculture Secretary Emmanuel Pinol holds a manual for Avian Influenza Protection during a news conference on the confirmation of the first bird flu case in the country Friday, Aug. 11, 2017 in Manila, Philippines. Pinol said the Philippines will cull at least 400,000 birds after confirming its first bird flu outbreak, but that no animal-to-human transmission has been reported. (AP Photo/Bullit Marquez)

SAN LUIS, Pampanga — Poultry raisers can get reimbursed for their losses if they show the feet of chickens, quails and ducks gassed in a government effort to prevent the spread of bird flu.

The government will need the feet as “proof of compensation,” Agriculture Secretary Emmanuel Piñol said on Tuesday during a visit to the town he placed under quarantine following the avian flu outbreak last week.

“Save those pairs of feet. Those are your evidence when you claim compensation for your culled birds,” Piñol told some 100 traders at a forum here.

Pampanga Vice Gov. Dennis Pineda has formed a team to make an inventory, validate and certify the destroyed birds.

The Bureau of Animal Industry (BAI) has condemned 131,500 to 200,000 birds on 13 farms in Barangays San Carlos and Sta. Rita in San Luis that are enclosed by a 1-kilometer quarantine zone.

The birds exposed to avian flu would be placed in sacks, gassed with carbon dioxide and buried in pits. Four laboratories tested several samples of the birds and concluded these were positive for the H5 strain.

The initial three-day culling was supposed to end on Monday, but the BAI extended the process for another five to six days.

Farms within the 7-km control area covering the rest of San Luis, Mexico, San Simon and Sta. Ana towns have agreed to surveillance and the voluntary culling of their stocks as a precaution.

After reporting the outbreak on Friday and setting up the quarantine, Piñol announced a package of compensation and assistance.

He said affected poultry farms would be entitled to P80 for each egg-producing chicken and duck as well as each broiler, or bird fattened for meat, that the government was forced to destroy. Farmers would get P10 for each destroyed quail.

The budget for compensating damages was initially set at P16 million covering the 1-km quarantine zone and P52.8 million for farms within a 7-km control zone.

The government will also give P5,000 to traders and displaced employees and a loan of P20,000 without interest and collateral and payable in three years through a rural bank in San Luis.

Piñol said he would put up another loan window that would offer less than 6 percent interest.

“I want to be on the safe side. I don’t mind if I spend P100 million to contain this problem. I’m willing to do it. The moment this spreads, this is going to be a big problem to the Philippines,” he said. “This is a nightmare as far as I am concerned.”

The source of the virus is still being investigated. The Department of Agriculture has requested parallel tests by a laboratory in Australia to check the presence of the H5N1 strain, which is harmful to humans.

“Our focus is to clean ground zero,” Piñol said. To regain the avian flu-free status of the Philippines, he said he ordered random testing in poultry farms, organized biosecurity teams and directed the procurement of sprayers for disinfection.

He has also authorized incineration for those who could not find burial pits.

As of Tuesday, 50,000 chickens had been culled in the 1-km zone. Infected chickens that were buried in a fishpond had started to float, emitting foul odor in the village.