Bullets at the airports: They never learn | Inquirer News

Bullets at the airports: They never learn 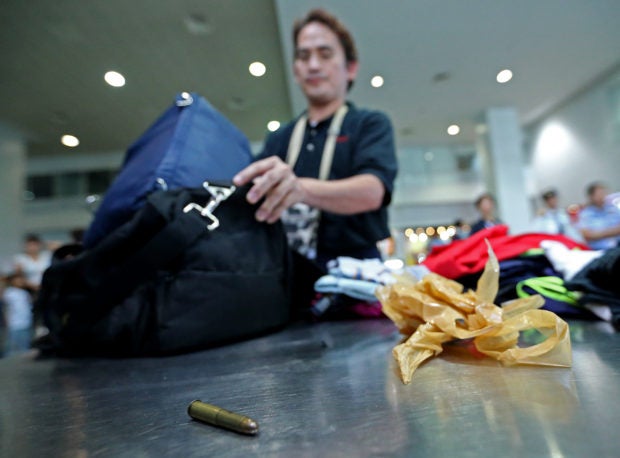 FILE- BULLET FOUND AT PASSENGER’S BAGGAGE AT NAIA TERMINAL 3/NOV.4,2015
A bullet is found in the baggage of Rey Salado, a passenger bound for Cagayan de Oro City at the NAIA Terminal 3. Salado admitted that the bullet was his after receiving it from a friend.
INQUIRER PHOTO/RAFFY LERMA

“We can’t explain it. Despite all the incidents and warnings and news reports, it hasn’t stopped,” Manila International Airport Authority public affairs chief Connie Bungag told reporters when asked about three incidents on Sunday of people getting caught with bullets in their possession.

“We encourage everyone to be aware of this prohibition,” Bungag added.

Airport authorities said people, mostly from the provinces, often kept bullets as amulets and many did not know bringing them was prohibited.

In previous years, following allegations of bullet-planting and extortion, the government said it would no longer press charges if passengers and visitors caught with bullets were determined not to have evil intent in possessing them. —Jerome Aning