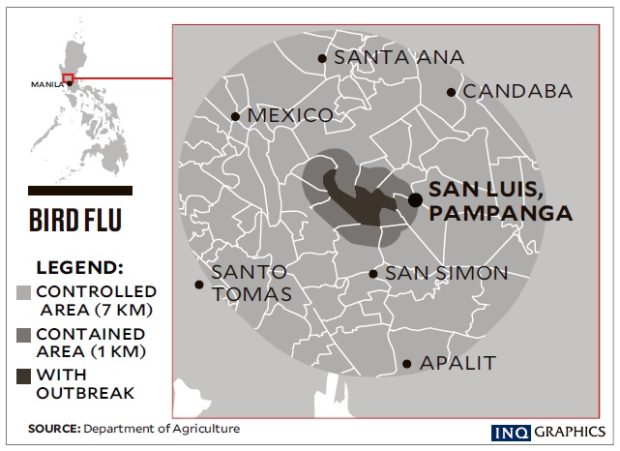 SANTO TOMAS, Pampanga — Business resumed on Monday after the Bureau of Animal Industry (BAI) lifted restrictions on the transport and sale of birds and poultry products produced outside a 7-kilometer control area surrounding the bird flu infestation site at San Luis town in Pampanga province.

“The first memorandum [issued on Aug. 11] raised confusion so we consulted experts and this is the revised version,” Assistant Secretary Enrico Garzon Jr. of the Department of Agriculture (DA) told poultry growers in the towns of Santo Tomas and Minalin on Monday.

The first memorandum, signed by Garzon as BAI chief, imposed a temporary ban on the movement of live domestic and wild birds and their products, including poultry meat, day-old chicks, eggs, semen, manure from Luzon to the Visayas and Mindanao.

This was issued after laboratory tests confirmed the strain of H5 virus on samples taken from farms in two villages in San Luis.

The memorandum issued on Aug. 14 said that “Luzon-to-Luzon movement of live birds, including poultry meat, day-old chicks, eggs, semen, manure and other products may be allowed provided [these are obtained] outside of the 7-km radius control area of Pampanga.”

Santo Tomas Mayor John Sambo earlier appealed for a review of the restrictions in the town outside the 7-km control area. He said traders should be allowed to bring their produce to local markets since the 15 poultry farms in the town remained bird flu-free.

Mayor Edgar Flores of Minalin and Mayor Danilo Baylon of Candaba also made similar appeals, after orders for eggs were canceled or reduced. No avian flu cases have been monitored in Minalin and Candaba, located outside the 7-km control area.

According to Milagros Mananggit of the DA integrated laboratory division, poultry farms in Santo Tomas have “no unusual mortality.”

The extermination of 131,500 egg-laying chickens, quails and ducks on 13 farms in Barangay San Carlos and Santa Rita in San Luis would be extended by five to six days from the original three-day timetable, Vytiaco said.

Culling began on Saturday night with 180 chickens. As of Sunday, between 16,700 and 23,000 birds had been euthanized using carbon dioxide.

Lack of personnel and dry soil pits has delayed the culling. Only five out of 100 men in Barangay San Carlos agreed to be hired for the cull. They backed out despite a P700 daily allowance. They also refused to be vaccinated and wear protective suits.

Garzon also said a DA team was evaluating compensation rates initially recommended at P80 per chicken and P10 per egg.

In Binmaley, Mayor Simplicio Rosario said no migratory birds had been sighted in the town, where the birds come to eat fish being cultured in fishponds.

In Bani town, 57 species of migratory birds dwell in the Bangrin mangrove forest, including the endangered Philippine duck, during migration season.

The annual bird migration season starts in September and birds return to their breeding ground in March the following year, the Department of Environment and Natural Resources said.

In La Trinidad, Benguet, the provincial government tightened the entry of chicken dung, which farmers use as organic fertilizer to grow salad vegetables.

An average of 400,000 sacks of chicken dung are transported to Benguet every month. —With reports from Yolanda Sotelo and Karlston Lapniten