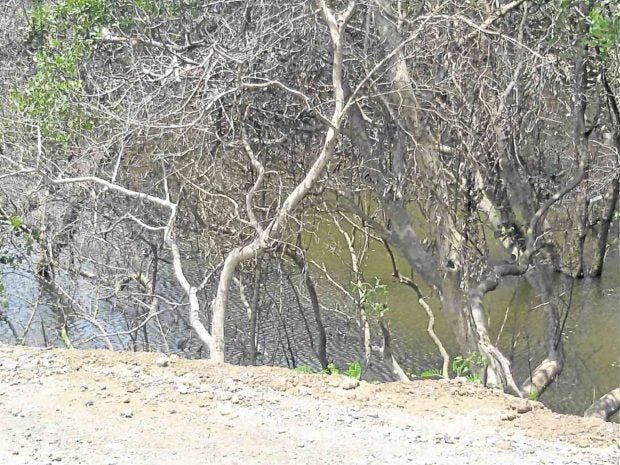 Mangroves in the Iloilo River are dying because part of the Esplanade project is blocking the flow of seawater, which is crucial to mangrove health. —PHOTO COURTESY OF JURGENNE PRIMAVERA

ILOILO CITY — Unseen in a river system that Environment Secretary Roy Cimatu once described as the cleanest he had seen in the country are mangroves dying because they had been submerged in too much fresh water.

A mangrove specialist and retired scientist blamed this on a riverside park that was built with pork barrel funds and meant to accentuate the beauty and cleanliness of Iloilo River.
But while the park, called Esplanade by proponents and hailed as a model of good pork use, had succeeded in drawing praises, it had been killing mangroves.

Jurgenne Primavera, retired scientist and mangrove expert, said mangroves near Iloilo Bridge along the Senator Benigno S. Aquino Jr. Avenue had died or were dying after these parts of the river bank had been diked.

“The trees are submerged and cannot breathe,” said Primavera, who was cited in 2008 by Time magazine as one of its “Heroes of the Environment” for her work on environmental and mangrove protection.

The head of the Department of Environment and Natural Resources (DENR) in Western Visayas said the flow of seawater, which was needed for healthy mangroves, had been obstructed.

“There is more fresh water because access to seawater has been blocked,” said Jim Sampulna, DENR Western Visayas executive director.

Sampulna said at least five mangrove trees had died or were dying because of changes in water salinity due to the reclamation of parts of the river.

Primavera said mangroves were, by nature, submerged only 30 percent of the time and their roots were exposed most of the time.

“Tidal flow is most critical for mangroves,” Primavera told Inquirer. “That is why they should have built the drain pipes first before diking the area,” she said.

The DENR regional office earlier raised concern over the impact of the Esplanade project on mangroves in the Iloilo River, which is actually an estuary where fresh water and seawater mix.

The city government declined to issue a statement or comment for this report.

Sampulna had tried to call the attention of the Department of Public Works and Highways (DPWH) in Western Visayas on the condition of mangrove trees affected by the Esplanade project.

The trees are from 10-20 years old, mostly belonging to the Bungalon (Avicennia marina) and some to the Pagatpat (Sonneratia alba) species, according to Sampulna.

Al Fruto, DPWH Western Visayas assistant director, said cross drains were part of the design of the Esplanade to allow water to reach the mangrove trees.

He said proponents also planned to earth-ball or move mangrove trees that would be affected by the project.

“We avoid the trees as much as possible,” he said.
But Primavera said earth-balling was not effective and would be impractical because it could expose the roots and root hairs of mangroves.

She cited the thousands of mangrove trees that were killed for another project, Iloilo Flood Control.

Sampulna said his office would review the Esplanade design because killing mangroves was against the law, according to Republic Act No. 7161.

The Esplanade consisted of six components. Esplanade 1 and 2 had been finished already and run parallel the Iloilo River from Iloilo Bridge to Carpenter’s Bridge in Molo District. It had become a tourist destination and popular recreation area where residents jog, dine in open air and take part in river water sports.

Primavera urged the DENR to ensure that the mangroves were protected.