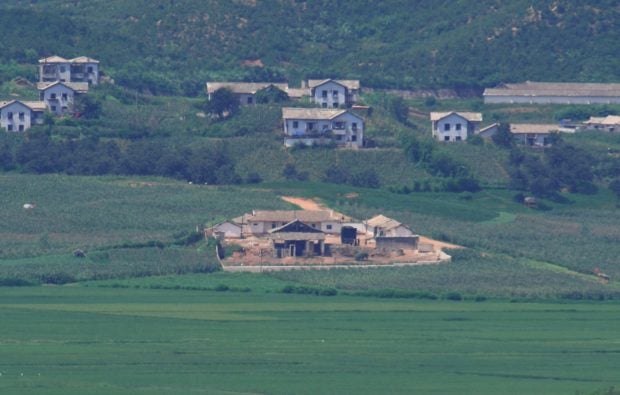 North Korea’s border county of Kaepoong is seen from a South Korean observation post in Paju near the Demilitarized Zone (DMZ) dividing two Koreas on August 11, 2017.

Hyeon Soo Lim, 62, was arrested in January 2015 on charges of subversive activities against the North Korean regime, an accusation denied by Ottawa.

“Today, we join Pastor Lim’s family and congregation in celebrating his long-awaited return to Canada,” the foreign affairs ministry said in a press statement.

“Canada has been actively engaged on Mr. Lim’s case at all levels, and we will continue to support him and his family now that he has returned,” it added.

According to local media reports, Lim was flown to a military base in Trenton, some 170 kilometers (100 miles) east of Toronto.

His liberation came at a moment of high tensions between North Korea and the United States. Three Americans remain in the custody of the regime of Kim Jong-Un.

Pyongyang has threatened to launch missiles on the island Guam, a strategic US outpost in the Pacific some 3,300 kilometers (2000 miles) from North Korea.

US President Donald Trump for his part as promised to rain down “fire and fury” on Kim’s regime.

Lim, who belongs to the Light Korean Presbyterian Church, was considered at the time of his arrest one of the most influential Christian missionaries in North Korea.

He had previously traveled extensively in the country to work in orphanages and hospitals.

But some projects he worked on, including a noodle plant and flour mills, were linked to associates of Jang Song-Thaek, the purged uncle of leader Kim.

Jang was arrested and executed for treason in December 2013.