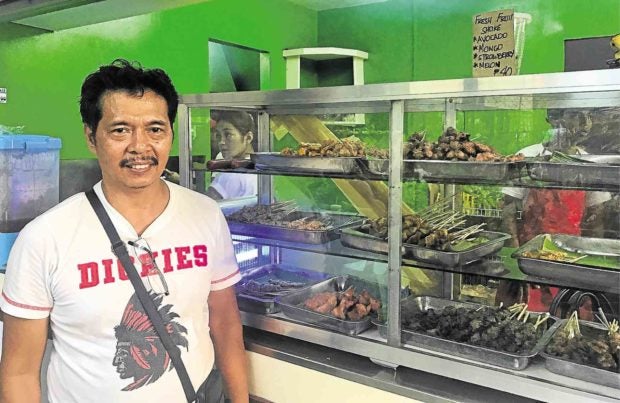 For over three decades, the grilled treats on its menu have satisfied students’ cravings, added sizzle to campus T-shirt designs, and even flavored the lyrics of an Eraserheads song.

After being moved to six different locations, Mang Larry’s Isawan has found a new spot on the University of the Philippines Diliman campus, and the man behind this “institution” hopes that both loyal and new customers who are aware of its history will still be following the smoke.

From its humble beginnings as a kitchen on wheels, the new Mang Larry’s sports a more professional look, occupying an approximately 15-square-meter area designed for customers who wish to stay longer.

Condencido said Balagtas Street was his seventh location since he set up his grill on UP campus in 1984. The first was the area in front of the UP Post Office  while the sixth was a spot near the UP swimming pool.

Despite those changes, Mang Larry’s popularity never waned in the UP community and beyond. Customers from the state university and neighboring schools formed long lines especially in the afternoons for a stick or more. Visiting alumni often dropped by to complete their nostalgia trip, while foreign tourists out for some Filipino street food had Mang Larry’s on their itinerary.

Last year, however, complaints from the swimming varsity team about the smoke coming from his grill, as well as the expansion of the UP College of Law, forced Mang Larry to look for a new site. 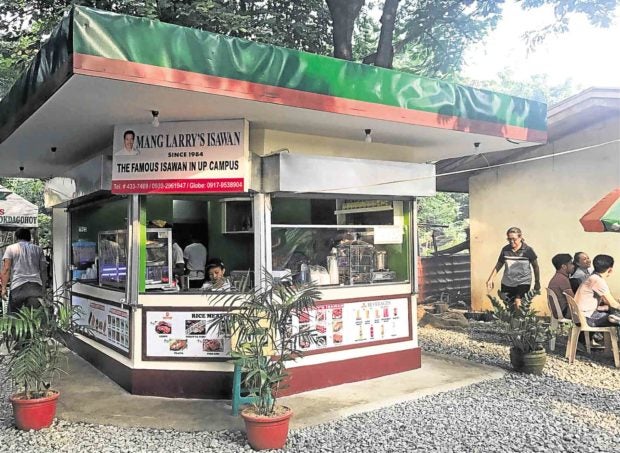 “Wherever I may be placed, as long as I am inside UP campus, people would still find my stall,” the 55-year-old entrepreneur said in an interview on Friday.

Nestor Castro, UP vice chancellor for community affairs, said he strongly encouraged Condencido to make his new kiosk “more presentable” since it had become part of the UP experience.

“We are hoping that this improvement would be a model for other vendors on the campus,” Castro said. “I showed my support for Mang Larry because I think this is the way to go.”

“The bottomline for me is that the food stalls should be affordable to students and preferably offer healthy food,” Castro said, noting that the UP students’ diet tends to consist of food high in sodium, like instant pancit canton.

Expanding his business hours so he could also serve breakfast and lunch, Condencido remains hands-on and proudly aware of his place in UP campus life.

“People come here and ask where Mang Larry is. I have served generations,” he said. “Even if I have smaller branches elsewhere, it is important for me that [this stall] stays in UP. It would be painful if we lose it.”

Castro agreed: “It’s part of UP’s heritage and it definitely has a place inside the university.”