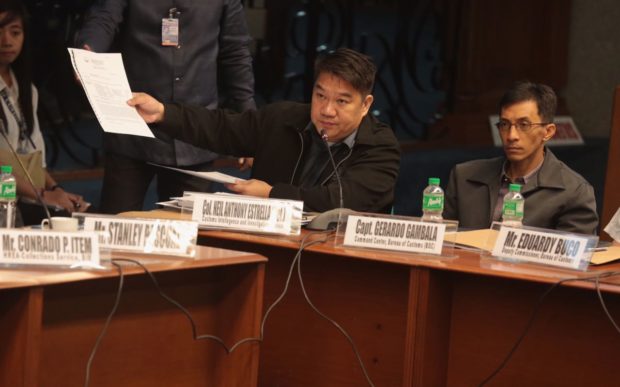 Col. Neil Anthony Estrella answers questions at the resumption of the Senate hearing on the 6.4 billion pesos shabu shipment seized by the bureau of customs. INQUIRER / Grig C. Montegrande

The intelligence chief of Bureau of Customs (BOC) has stepped down from his position in the wake of the P6.4-billion drug smuggling controversy.

Estrella said he is resigning in the “spirit of delicadeza” amid the simultaneous Congress investigations in the smuggling of 605-kilo methamphetamine hydrochloride (shabu) from China  through the BOC’s express lane in May.

“I have realized over the past days that I will no longer be able to fulfill my duties in the manner we both desire,” Estrella said.

“The sensitivity of my office and the methodology it entails have now been compromised by unnecessary publicity. I hope my resignation paves the way for an impartial investigation and leads to substantive reforms in the BOC,” he added.

Estrella was also tagged by private customs broker Mark Taguba for accepting bribe money to process shipments in the agency.

The intel chief, however, denied the accusations, calling it “unfair” and “foul.”

“I deny in the strongest possible terms having received money or any form of bribe from Mr. Mark Taguba. As he himself admitted, he merely relied on text messages. I am not on his list,” he said.

Estrella said he “never participated” in any “cover-up or bungling of an investigation for personal gain.”

He maintained that his conscience is clear and “dedicated practically 100 percent of my time and efforts in the service of our people.” JE