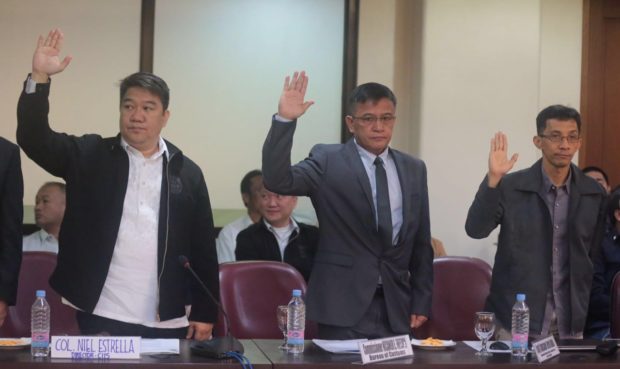 This was how Philippine Drug Enforcement Agency regional director Wilkins Villanueva described the Bureau of Customs’ alleged mishandling of the 605 kilograms of smuggled crystal meth seized from a Valenzuela City warehouse.

Besides Villanueva, lawmakers likewise chewed out the BoC officials for procedural violations which may likely lead to the failure to any charges that can be filed over the contraband shipped from China.

“Commissioner, it’s a pity the President trusted you. You were from nowhere. We don’t even know why you were placed there,” Barbers said. “You should resign, to avoid further embarrassment to our President. All of you, you should all resign. I’m waiting for you to submit your resignation.”

However, Faeldon stood his ground before the lawmakers: “I am a solider. I do not treat this position as a job. For me, this is a mission. However, a soldier can be fired. Let the President fire me.”

During the hearing, Villanueva, who was cloaked with legislative immunity, revealed that not only was PDEA left out of the operations initially, it also had disagreements with BoC on the proper handling of the drug evidence.

After Faeldon sought the assistance of Director-General Isidro Lapeña on the morning of May 26, Villanueva was tasked to join the operations.

But, when PDEA operatives arrived at the scene in the afternoon, he was surprised that the crates, and the printing cylinders used to hide them, have already been opened up by the BoC personnel. Villanueva said if PDEA had its way, it would have normally cordoned off the drugs.

Villanueva also disagreed with Faeldon and BoC Customs Intelligence and Investigative Service Director Niel Estrella on how to properly conduct a “controlled delivery” operation on the illegal drugs and preserve the integrity of the evidence.

A controlled delivery is an investigative technique of allowing a suspect shipment to pass through under the supervision of an authorized officer to track the persons involved in the unlawful trade.

Villanueva, a 16-year antidrug veteran, said all five crates of illegal drugs should have been used for the operations, but Faeldon, whom he said consulted his fiancee lawyer who doesn’t work for the government, insisted that only one crate be used.

“You have to guide the whole cargo. You cannot choose. But he butted in that one crate is good for us to file a case,” he said. “We did not want to agree. Many in the antidrug community are laughing at us. We insisted and failed to convince him.”

“We’re pretending to be smart here, when we really know nothing,” he sniped at the BoC officials.

Faeldon said Villanueva’s account was 90-percent truth but “a half-truth is not the truth.” He said he wanted to retain four crates amounting to 505 kilograms of drugs in the compound so these could be used as evidence against the warehouse’s owner.

Estrella, meanwhile, explained that the drug crates were opened up so he could see for himself and “validate the information given to me.”

‘Not adept with the law’

Lawmakers did not buy the BoC officials’ reasoning. Sagip Party-list Rep. Rodante Marcoleta noted that the PDEA has the expertise over drug operations and its position should have been given weight.

Even from the start, the raid was already on shaky ground for being based on a mere letter of authority issued by Faeldon, instead of a search warrant, Majority Floor Leader Rodolfo Fariñas said.

“When it reaches the judiciary, it’s dismissed. What happens is it would be illegally obtained evidence, aside from other matters that will surface later on,” Fariñas said. “It’s so scary that you are not adept with the law.”

Faeldon maintained that Customs operatives can act on suspect shipments “as long as these LOAs have something to do with the importations.”

Barbers also blew up at the BoC officials for conducting the surveillance operations prior to the raid without seeking PDEA’s assistance as mandated under Republic Act No. 9165, or the Comprehensive Dangerous Drugs Act of 2002.

Estrella said PDEA was not immediately looped in because the information at the time was not yet solid. Barbers did not believe this because the tip-off that there was indeed drugs actually came from a Chinese customs informant.

“You’re fooling us. Do you know the law? What are you telling us that you’re conducting surveillance? You cannot conduct that without PDEA,” he said.

Valenzuela City 1st Dist. Rep. Weslie Gatchalian, for his part, said the BoC’s lapses opens the possibility that more drugs have been released into the streets.

After Estrella admitted that a previously undisclosed second raid took place four days after the May 26 discovery, Gatchalian questioned why this was not revealed earlier in the reports submitted to the House.

“There is no intent to hide anything. No intention but to recover the shipment,” Estrella said. “It’s automatic in our mind for us to suspect if there’s more to the shipments, that’s why we exerted efforts.”

However, Gatchalian said a second raid would mean the BoC is still looking for drugs that may be out there. “It’s possible that this got out to the market. In Valenzuela, maybe many are taking the drugs.”

Barbers, throughout the hearing, insinuated that the procedural violations arose from either incompetence or were actually intentional. He implied that the case may have been sabotaged by tampering with the evidence.

“This does not seem to just have a semblance of incompetence. It seems to me, I may be wrong, that there was a clear attempt to cover up these particular drugs that was found,” he said.

PBA Party-list Rep. Jericho Jonas Nograles went so far as to say, “Commissioner Faeldon and Col. Estrella are suspects in this drug importation for them to violate their own laws.”

“To my knowledge, this Command Center [ComCen] facilitated the movement of this contraband shabu,” Rodriguez said.

Barbers also raised a similar question: “Who are they protecting? Who are they working for? Is this the reason too why the Commissioner has centralized power in his office, and all top officials are his comrades-in-arms?”

Faeldon, however, clarified the creation of the ComCen does not mean that the functions of the various groups—including the intelligence and enforcement group, assessment and operation coordination group, revenue monitoring group, management information system and technology group, and accounts management group—were placed under his supervision.

He explained that each of the BoC’s eight groups have “representatives” under the ComCen. “It is not a whole office that’s under my supervision. It’s just the personnel. Any concerned office has a representative to thresh out these issues,” he said.

Barbers pointedly asked if the creation of the ComCen helped in curtailing the entry of drugs. He noted: “Before, we have never heard of billions worth of shabu.”

Faeldon maintained that “it is more effective than the previous setup.”

He also claimed the accreditation of 65 importers have been either suspended or cancelled from June 2016 to June 2017, compared to the zero brokers disciplined under the Aquino administration.

These figures were disputed by Muntinlupa City Rep. Rozzano Rufino Biazon, a Customs commissioner from 2011 to 2013, as having “some inaccuracies.”

In his opening statement, Barbers said the BoC aspect helps explain why drugs continue to be in the market even as domestic manufacturing has become risky due to the “success” of the government’s bloody anti-drug campaign.

“These raids show the success of our war on drugs is being undermined by the very same people our president trusted,” Barbers said, adding that the illegal drugs have been smuggled under the BOC’s noses “either undetected, due to gross negligence, or maybe their noses can only smell crisp bills.”

Barbers also hit back at the Customs officials for being “scandalously unqualified imbeciles,” a callback to the private Facebook rant of Faeldon’s chief of staff, Mary Therese Anderson, who had described Speaker Pantaleon Alvarez as an “imbecile.”

Addressing Anderson’s accusation that Alvarez tried to force the promotion of an unqualified Customs personnel, Barbers said: “They’re not fit for the job, yet they have the balls to tell the Speaker a longtime employee is not qualified. Look who’s talking!” JE