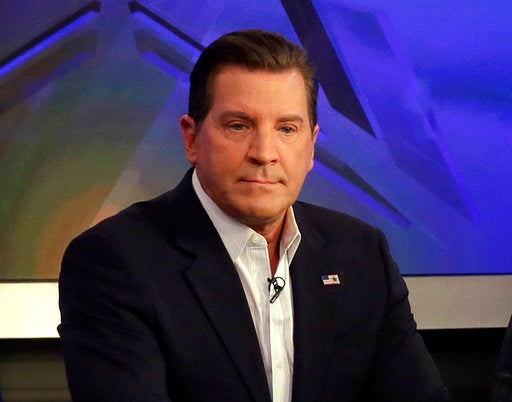 FILE – In this July 22, 2015 file photo, co-host Eric Bolling appears on “The Five” television program, on the Fox News Channel, in New York. Fox News announced on Saturday, Aug. 5, 2017, that Bolling has been suspended while it investigates a report that “The Specialists” co-host sent at least three female colleagues a lewd text message. Bolling’s lawyer calls the accusations untrue and says he and his client are cooperating with the investigation. (AP Photo/Richard Drew, File)

Bolling filed a $50 million defamation lawsuit in New York state Supreme Court against Yashar Ali, a Huffington Post contributing writer. The cable news host said Ali damaged his reputation through what Bolling called the “highly reckless publication of actionable false and misleading statements about the plaintiff’s conduct and character,” according to the suit.

Bolling was suspended over the weekend pending an internal investigation that a Fox spokesperson said is underway.

Ali wrote last week that Bolling is accused of sending unsolicited photos of male genitalia to co-workers over several years.

On Wednesday, the reporter tweeted that he stands by his story and will protect his sources. Ali also wrote that he is not going to stop reporting on Bolling “or anyone else. I’ve had family members killed/jailed in Iran, a lawsuit isn’t going to scare me.”

Bolling’s lawyer, Michael J. Bowe, said in a statement: “This anonymously sourced and uncorroborated story is false, defamatory, and obviously intended to destroy this good man’s career and family. We will defend Eric aggressively in court, where actual facts, based on evidence, testimony, and cross-examination, will belie these anonymous accusations.”

Bolling tweeted that he “will continue to fight against these false smear attacks! THANK YOU FOR CONTINUED SUPPORT.”

Huffington Post is not involved in the legal action.