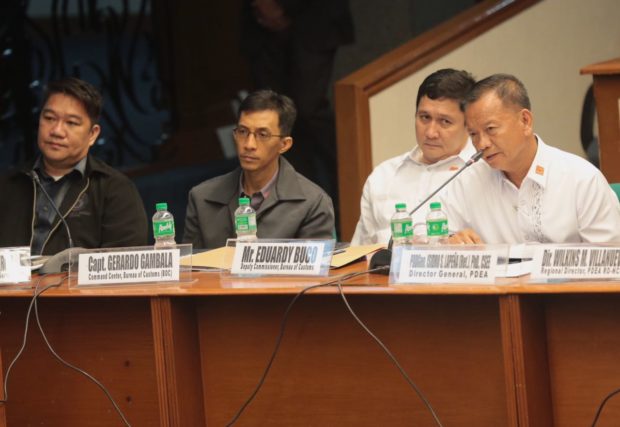 Four senators on Wednesday confirmed reports linking them to Filipino-Chinese businessman Kenneth Dong, the middleman in the delivery of 604-kilogram shabu from China into the country.

This development came after the Senate blue ribbon committee holds an inquiry on the drug shipment that passed through the system of the Bureau of Customs (BOC) last May. Dong, for the first time, attended the hearing.

Dong was allegedly the middleman who dealt with broker Mark Taguba in the shipment from China that contained P6.4 billion worth of shabu.

He also contributed in the campaign of Senator Joel Villanueva for the senatorial elections last May.

In separate statements, Zubiri, Hontiveros, Pangilinan and Villanueva confirmed reports that they had connections with Dong.

Zubiri admitted that he was a principal sponsor at Dong’s wedding but said he has not seen him since last December. He said he considers Dong a “friend.”

“I got to know Mr. Kenneth Dong when a friend introduced him to me several years ago.  I was told that he is a legitimate businessman and an importer of Asuki industrial weighing scales. I consider him a friend but I do not know what his dealings and businesses are except for his ownership of Asuki,” Zubiri said in a statement.

“He made me ‘ninong’ at his wedding and I was only one of many senators, politicians and celebrities who were asked to be principal sponsor. I have not seen him since last Christmas, close to eight months ago. As a public servant, I meet a lot of people and do not prejudge them,” he continued.

But the senator stressed he does not condone any illegal act, especially if this involves drugs, adding that he was one of the principal authors of the Comprehensive Dangerous Drugs Act.

“I always believe that no one is above the law. Should there be any evidence of Mr. Dong’s involvement in the said illegal drug trade, he should be brought to the bar of justice,” Zubiri said.

“If anyone breaks the law then, without fear or favor, friend or not, the law must be implemented and, if found guilty, should be arrested,” he said.

Hontiveros, meanwhile, said she met Dong in 2012, who was introduced to her as a legitimate businessman selling industrial weighing scales.

She said Dong also helped in her senatorial campaign, as well as in her relief operations for the victims of Supertyphoon Yolanda.

“Noong 2013, ako, kasama ng mga kapwa ko senador gaya nina Senators Migz Zubiri, Kiko Pangilinan at Ralph Recto, ay naimbitahan mag-ninong at ninang sa kanyang kasal. Kaya’t pare-pareho kaming nagulat ng mabanggit ang kanyang pangalan sa Senate Blue Ribbon Committee hearing (In 2013, me and my fellow senators like Senators Migz Zubiri, Kiko Pangilinan and Ralph Recto, were invited to stand as godfather and godmother for his wedding. That is why we were shocked when his name was implicated in the Senate Blue Ribbon Committee hearing),” she said in a statement.

The senator said she will “not tolerate any accusations of irregularity that will smear my personal integrity and record of service to the people.”

Pangilinan, although he denied that Dong donated to his campaign, confirmed that he was one of the sponsors during the latter’s wedding.

“No he wasn’t a campaign donor. I met Mr. Kenneth Dong when I was chairman of the Senate committee on agriculture and food during my second term as senator. I was the keynote speaker during the International Agri Tourism Summit upon his invitation. In November 2013, I became one of the sponsors during his wedding,” Pangilinan said in a statement.

If Dong has nothing to hide, Pangilinan urged him to face the investigation and tell the truth.

“I read in the papers that Kenneth insists on his innocence. If so, then he has nothing to hide and should answer the accusations by just telling the truth. We will not condone wrongdoing. We believe those wrongly accused should be absolved and those guilty be held to account regardless of who they are,” Pangilinan said.

No interaction with Dong

Villanueva, for his part, said Dong indeed contributed to his campaign but did not know the businessman personally.

“I met Mr. Kenneth Dong when I was invited to grace the opening of the 1st International Agriculture and Tourism Expo on June 30, 2011 at the World Trade Center. We talked about the agricultural programs of TESDA being the agency’s director general at the time,” Villanueva said in a statement.

“Since then, I never had a substantial meeting or interaction with Mr. Dong,” he said.

During the campaign, Villanueva said Dong was one of the businessmen who contributed when he was doing fund raising activities.

But Villanueva reiterated that he never had a personal interaction with Dong since it’s his campaign team who was the one receiving all the contributions for his campaign.

“My conscience is clear. I barely know Mr. Dong. I don’t have his number, we never talk on the phone,” he said.

The senator said he supports the congressional hearings that would get to the bottom of the issue, particularly the extent of Dong’s participation in the drug shipment.

“However, we want to know the truth. We want to find out if Mr. Dong is really involved in this and up to what extent. At the end of the day, this is not just about drugs, this is about destroying the morals of our society especially our young people. I cannot just sit here and not take part on getting to the bottom of this issue. It’s good that Mr. Dong attended the hearing today so he can answer all the accusations hurled against him,” he said. JPV