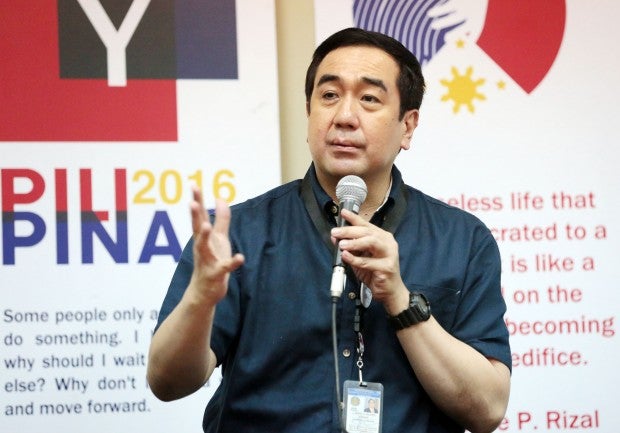 Minority Leader Franklin Drilon said he would no longer question whether the blue ribbon committee had jurisdiction over an investigation of Commission on Elections (Comelec) Chair Andres Bautista, who is accused by his estranged wife of amassing P1 billion in unexplained wealth.

Majority Leader Vicente Sotto III, who sought the Senate inquiry, said the committee could very well investigate the Comelec chief, as it did in 2014 when it looked into corruption allegations against former Vice President Jejomar Binay.

Drilon had reservations on Monday over whether the blue ribbon committee could investigate Bautista because an impeachment complaint could be filed against him.

Sotto said he was glad that Drilon dropped his objection.

He assured the public that the Senate would discontinue the hearing once an impeachment complaint was filed against Bautista in the House of Representatives.

Sotto insisted that his resolution was in aid of legislation and not to find out whether the Comelec chief was guilty of his wife’s allegations.

“The essence of my resolution is to find out what’s wrong with the SALN (statement of assets, liabilities and net worth) law, or Republic Act No. 6713, on why some officials are able to circumvent the law,” he said in a phone interview.

He noted that Bautista declared a net worth P176 million in his SALN for 2016, but his wife, Patricia, produced documents showing that the Comelec chief had more than P300 million in cash and real estate properties that he did not declare.

“I don’t care if he is guilty or not,” Sotto said.

He said the purpose of his resolution was to “fix the law.”

Sotto filed a resolution on Monday asking the blue ribbon committee to look into whether Bautista truthfully declared his personal wealth in his SALN.

He said his resolution would be referred on the floor on Wednesday.

On Tuesday, another resolution in the House seeking a congressional probe of the accusations raised against Bautista was filed by Caloocan Rep. Edgar Erice, who said the charges cast doubt on the integrity of the 2016 elections.

Other lawmakers were lukewarm to Roque’s proposal.

Albay Rep. Edcel Lagman said he did not wish to meddle in what appeared to be a domestic squabble between the Bautista couple.

Majority Leader Rodolfo Fariñas said the only proper way for the House to investigate the charges of unexplained wealth leveled against Bautista was through an impeachment proceeding.

Asked to comment on Roque’s call for a House probe of the allegations against the Comelec chief, Fariñas on Tuesday said that it might be a pointless exercise.

“The House probes or investigates impeachable officials through the process of impeachment. Any other proceeding would result [in] redundancy, as any finding thereof would only be recommendatory,” Fariñas told reporters in a group message.

“If it finds sufficient ground to proceed against such official, it would resort to impeachment proceedings,” he said.

“With respect to infractions of the law, let the proper forum resolve that,” Lagman told a press briefing.

Bautista denied his wife’s claims and countered that she was extorting money from him in the ongoing settlement to end their marriage.

The Comelec chief on Tuesday said he was open to a lifestyle check.

The allegation was made by Patricia in an affidavit submitted to the National Bureau of Investigation on Aug. 1.

Bautista, in a press conference on Tuesday, said the primary issue in his marriage with Patricia was how to use money.

“If ever we have a primary issue in our marriage, it’s how to use money. Again, I will not deny this, my siblings knew that I’m quite stingy … And I want to teach my kids that they have to live within their means,” he said.

“She (Patricia) always had a problem with money. I had to bail her out of a credit card debt in 2012 for P3.2 million,” he said, adding that his wife owned a lot of credit cards.

“I don’t know [what she bought] … and to think I gave her an extension card. She had a checkbook from me. It’s true I was the one managing the family finances,” Bautista said.

Election watchdog group Kontra Daya, meanwhile, urged Bautista to take a leave of absence amid the controversy he was facing.

In a statement, Kontra Daya convener Danilo Arao said it would be better if Bautista would go on a leave from the Comelec for the sake of ensuring credibility of any forthcoming probe.

“By taking a leave of absence, Bautista will not be able to use his position at the Comelec to influence the outcome of the probe,” Arao said.

“The result of the probe would be put in question [if he does not go on leave] as Bautista will be vulnerable to accusations of interference,” he added.