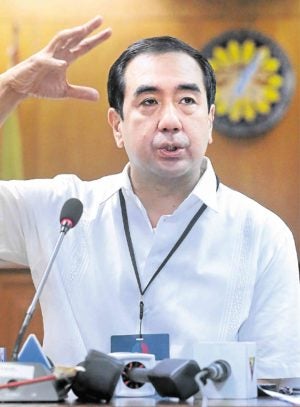 Comelec chief Andres Bautista says the money in the accounts does not all belong to him. —GRIG MONTEGRANDE

Commission on Elections (Comelec) Chair Andres Bautista claims he has accounts with Luzon Development Bank (LDB) but fewer than the 35 disclosed by his estranged wife.

Bautista also claims that the amount in his LDB accounts is not as huge as the total balance of more than P300 million that Patricia Paz “Tish” Bautista alleges.

Patricia based her accusation on the passbooks that she found in their conjugal home, an upscale condominium unit in Taguig City.

Thirty passbooks were with LDB’s Taguig branch while the other five were with the bank’s Makati branch.

The Comelec chief also said that the money in the accounts “[does] not all belong to me.”

“Most of [it] belong[s] to my parents, my brother and my sister,” Bautista told the Inquirer. He was referring to his brother, Martin, and sister, Susan Bautista-Afan.

Bautista said Martin was doing well as a doctor in the United States, while Susan also earned substantially when she lived in United States. Susan, a dual citizen, is now with ABS-CBN Foundation.

Bautista said he was the designated family treasurer.

“I don’t think it’s that many … Even the amount, I don’t know where she got this P320 million,” Bautista said, referring to LDB passbooks that Patricia showed to reporters and included in the affidavit she submitted to the National Bureau of Investigation.

Bautista, a lawyer who worked with several private companies and was a law dean, was appointed chair of the Presidential Commission on Good Government (PCGG) in 2010 and later as Comelec chief in 2015.

A check of the LDB passbooks that Patricia showed to journalists indicated that there were 13 passbooks for accounts opened in September 2014, 10 in 2015 and four in 2016.

The Anti-Money Laundering Council can open accounts and determine the source of the deposits if it has doubts about their legitimacy.