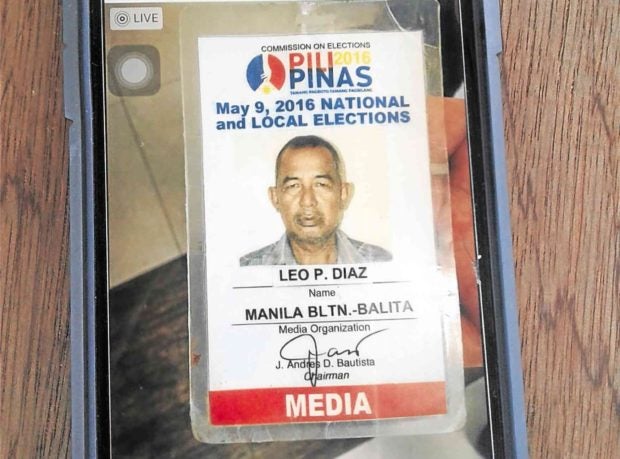 On Monday, after alerting the staff of dxMY radio that he would file a report on illegal drug activities in Sultan Kudarat, Leodoro Diaz was shot and killed by two men on a motorcycle in this town.

When dxMY staff members called Diaz to ask him to go on air, his son, Cris Jay, took the call instead to report that his father was shot and killed in Barangay Kalanawi 2, as they were traveling on a motorbike to Tacurong City.

Cris Jay said he and a relative on board the same motorcycle with his father were unhurt.

Senior Supt. Raul Supiter, Sultan Kudarat police director, said police were coordinating with the local Land Transportation Office to identify the owner of the motorcycle used by the suspects.

“We believe it was work-related, but we are digging deeper. We have leads that could eventually identify and arrest the perpetrators,” Supiter said.

He said two men were seen tailing Diaz and his companions before the attack at 8:40 a.m.

“[My father] had no known enemies but he was very vocal in exposing the activities of illegal drug personalities in his column,” Cris Jay, a photojournalist, told the Inquirer.

Diaz’s death came a day after the murder of another media worker, Rudy Dahunan Alicaway, 46, in Molave town in Zamboanga del Sur.

Alicaway, also a village council member of Barangay Miligan in Molave, was a radio anchor for the program Tigmo-Tigmo at dxPB 106.9 Radyo ng Bayan in Molave.

He was on his way home when he was shot and killed by two men on a motorcycle on Sunday. Alicaway died while being taken to Salug Valley Medical Center.

The deaths of Diaz and Alicaway, if proven to be work-related, would bring to 177 the number of media workers killed in the Philippines since 1986, the National Union of Journalists of the Philippines (NUJP) said.

“This again highlights the culture of impunity in the attacks against … Filipino journalists … despite international outcry,” Dabet Panelo, NUJP secretary general, said in a statement. —Edwin O. Fernandez and Julie S. Alipala