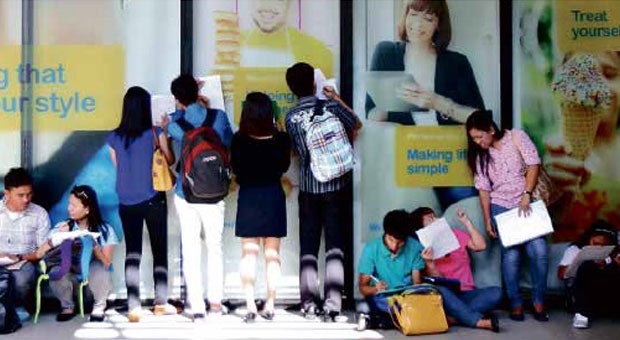 An estimated 10.5 million Filipino adults remained jobless in the country, according to a recent survey conducted by the Social Weather Stations (SWS).

The survey, conducted from June 23 to 26, showed that 22.2 percent or an estimated 10.5 million adults are jobless, higher than the 10.4 million and 10 million jobless adults recorded last March and June last year, respectively.

The labor force participation, according to the survey, was at 74.7 percent or an estimated 47.1 million adults, slightly higher than March’s 45.5 million adults. Labor force was defined by SWS as those aged at least 18 years old with a job, including those who are currently looking for jobs.

Based on the survey, an estimated 5.7 million of the 10.5 million jobless voluntarily left their jobs; 2.9 million lost their jobs “due to economic circumstances beyond their control,” and an estimated 1.8 million adults were first-time job seekers.

Despite the growing number of jobless Filipinos, people’s optimism on job prospects in the next 12 months remained “very high,” the SWS said.

Because of this, June’s net optimism on job availability increased by two points to a “very high” (+31) from March’s “high” (+29).

Read Next
Comelec chief: Money from law dean payment for condo, not ‘commission’
EDITORS' PICK
‘Not yet the end’: Lawyer says Marcos Jr’s DQ cases to take lengthy process
Over 3 Million worth of prizes to be won at Smart Padala’s SENDali Manalo Promo!
Critical scenario: 3 Comelec vacancies just 3 months before elections
Acer starts the year off strong with the Aspire Vero National Geographic Edition
The best of bayside and city living at SMDC’s Sail Residences
PH logs 37,070 more COVID-19 cases; over 33K others recover
MOST READ
Duterte asks: ‘Is COVID-19 airborne?’ Duque blames spread on ‘token compliance’ with rules
Morissette Amon recovering after confinement for diverticulitis, tests positive for COVID-19
‘Not yet the end’: Lawyer says Marcos Jr’s DQ cases to traverse lengthy process
Marcos camp ‘extends hand of unity’ after COC cancellation bid is thrown out
Don't miss out on the latest news and information.