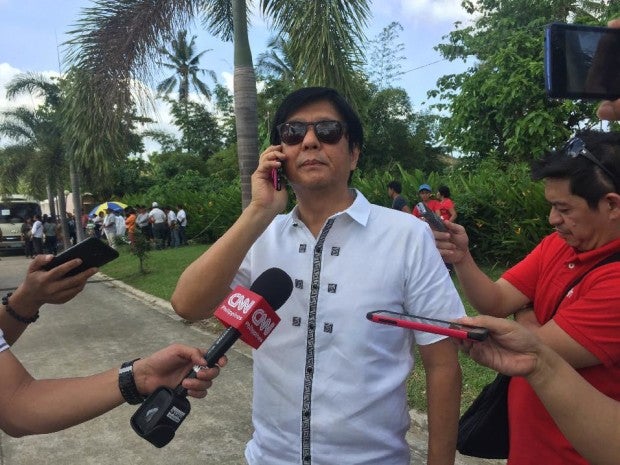 Former Senator Ferdinand “Bongbong” Marcos failed to abide by what was agreed upon during the preliminary conference to expedite the procedure of his election protest against Vice President Maria Leonor “Leni” Robredo.

In a manifestation submitted to the Supreme Court sitting as Presidential Electoral Tribunal (PET), Robredo, through counsels lawyers Romulo Macalintal and Maria Bernadette Sardillo, said that the Marcos camp, in their comment to the preliminary conference, has opposed on several matters that they previously agreed to.

But in his comment, Marcos insisted on presenting 51 witnesses for his first cause of action and with made reservations to the presentation of three witnesses per precinct.

Macalintal said that Marcos, in his comment, “backtracked, without any justifiable reason, on the number of witnesses in his first cause of action” and did not indicate the names of these witnesses along with the precinct numbers.

“Instead, protestant Marcos made the same reservation as to the presentation of three registered voters in the Two Thousand Seven Hundred Fifty-Six (2,756) clustered precincts in the provinces of Lanao del Sur, Maguindanao, and Basilan,” Macalintal said.

Also, Marcos initially agreed in the Preliminary Conference to implead the Commission on Elections (Comelec) as a party in his first cause of action but Marcos backpedaled in his comment and registered his objection to the Comelec’s inclusion in his protest.

Macalintal said that despite Marcos’ previous reservations that he will present more evidence of the alleged electoral frauds, anomalies and irregularities committed against him, Marcos does not have any evidence to support his assertions.

“Without the testimonial evidence or any other evidence, protestant Marcos has no cause of action to seek the recount, revision, and re-appreciation of the ballots,” Macalintal said.

“With his recent position regarding his protest, Marcos is clearly not sure of what he wants from PET. What is very clear is that he will merely fish for evidence with his motion to be allowed to change his three pilot provinces,” Macalintal added.

He said the Marcos camp should stop blaming their camp for allegedly delaying the process.

“For it is clear that whatever ‘delay’ there is in his protest is because of Marcos’ flip-flopping position on how he wants to proceed with his protest,” Macalintal added. Daphne Yann Galvez, INQUIRER.net trainee