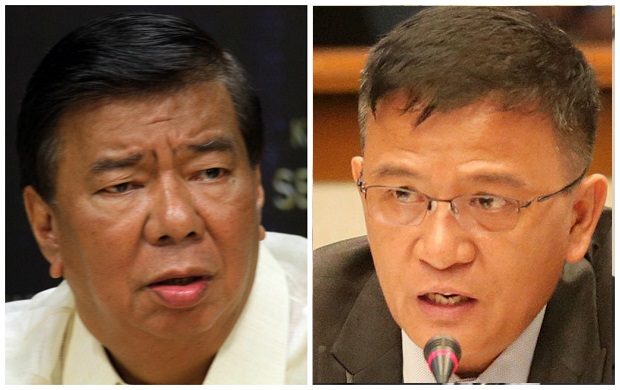 Senate Minority Leader Franklin Drilon on Sunday doubted the Bureau of Customs (BoC) could support government’s massive infrastructure program due to a “high level of corruption,” adding that the issue is a “slap in the face” of President Rodrigo Duterte’s war on drugs.

“It’s a slap in the face of the administration whose flagship program is to eradicate illegal drugs. It is bad enough that you lose revenues due to smuggling, but to take advantage of the system to smuggle drugs is far worse,” Drilon said in a statement.

Thus, the senator said that a “major revamp” was necessary in the agency.

Drilon is seeking a revamp despite accomplishments being claimed by Customs Commissioner Nicanor Faeldon during his first year as bureau head.

At a hearing at the House of Representatives on August 1, 2017, Faeldon compared the accomplishments of the bureau in one year against those of the BoC under the whole of the Aquino administration, to which Drilon was a key ally.

The interception rate of the BoC in 12 months already made up 48 percent of the total accomplishments of the past administration.

Faeldon highlighted the interception of P31.393 billion worth of smuggled cigarettes in their first year at Customs. The six years of the Aquino government only saw P51 million in seized contraband cigarettes, he said.

In terms of drug interceptions, the BoC chief said they already stopped P8.082 billion from entering the country compared to P8.677 billion intercepted during the six years of the previous administration.

Faeldon attributed the entry of P6.4 billion worth of shabu in May to the severe lack of X-ray machines at the country’s ports of entry, where only 18 percent of cargo are subject to X-ray inspection.

But Drilon, who has been part of government in various capacities since 1990, seemed unconvinced.

“The government can no longer rely on the current leadership of the Bureau of Customs to collect taxes necessary to fund the government’s programs, particularly big-ticket infrastructure projects that the government has outlined under its ‘Build, Build, Build’ program,” Drilon said.

“A major revamp in the custom is made necessary by what happened. We can no longer trust the incompetence of its officials led by Commissioner Nicanor Faeldon,” he added.

The BoC is currently at the center of controversy following the discovery of 604 kilograms of shabu worth P6.4 billion that slipped past the agency.

While the BoC is the second biggest tax collecting arm of the government, Drilon said the agency has always failed to meet its target collection due to a high level of corruption.

Citing government data, Drilon said that Custom’s collection for the first half of the year reached P210.64 billion, still behind its P218.71 billion target for January to June 2017.

Faeldon said the P210.64 billion collection was 96 percent of the target for the first six months of 2017.

The failure of the Customs to raise revenues, Drilon said, will negatively impact the government’s capability to deliver on its promises.

He said that “such a situation forces the government’s hands to put the burden of raising revenue on the people by way of increasing taxes.”

“Incompetence and complacency has no place in the government especially in an agency as crucial as the BoC,” Drilon said.

“Those who were involved in the shipment of this unprecedented P6.4 billion worth of shabu should be made accountable,” he added. CBB