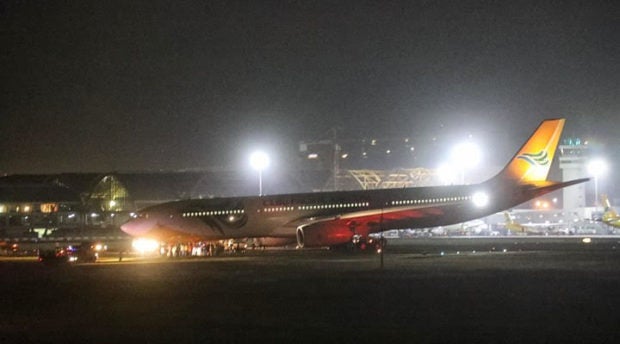 Cebu Pacific Plane overshoots the runway of Mactan Cebu International Airport in Lapu-Lapu as it was taxing on its way out of Cebu. Flights in and out of MCIA were cancelled. Tonee Despojo, CDN

In a Facebook post by Cebu Pacific Air, Cebu Pacific Flight 5j570 bound for Manila from Cebu figured in an incident as it was taxing prior to take-off from the MCIA at 6:35 p.m.

“The aircraft’s nose wheel (or front landing gear) went outside the runway,” the post read. As of 8:45 p.m., all 435 passengers, including three infants, were safely deplaned from the aircraft.

The airline said it was working closely with the GMR-Megawide Cebu Airport Corporation, operator of the MCIA, to speed up the towing of the aircraft so the runway can be opened as soon as possible.

Cebu Daily News tried to reach representatives of the airport operator for comment, but received no feedback as of this posting.

Meanwhile, as a result of the temporary runway closure in Cebu, the following Cebu Pacific and Cebgo flights were diverted: