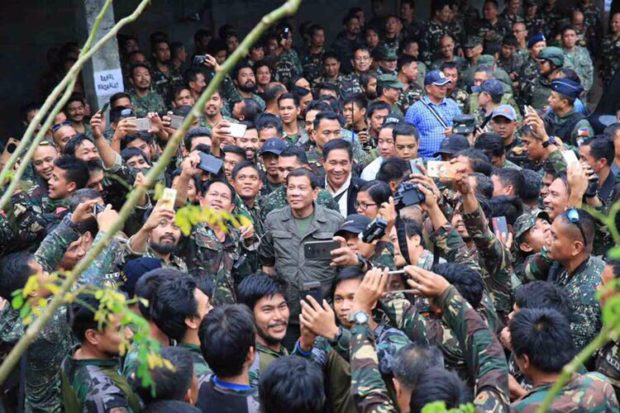 PHOTO COURTESY OF SPECIAL ASSISTANT TO THE PRESIDENT BONG GO

President Duterte visited Marawi for the second time on Friday to boost the morale of troops who have been battling pro-Islamic State extremists for more than two months.

During the visit, Mr. Duterte lashed out at former president Benigno Aquino III once more as he talked about the illegal drug problem, which he believes to be one of the root causes of the Marawi conflict.

He earlier called Aquino a fool for questioning the effectiveness of the administration’s anti-drug campaign.

“That hurt,” the President said, referring to Aquino’s comment.

“Many of my soldiers died, and my police were wounded… That’s insulting,” he said.

He said he was “sensitive” about this issue because of the many members of the state forces who have died.

“So if you’re careless in saying nothing happened, I would really lose my cool,” he said.

Mr. Duterte addressed the troops and posed for pictures with them, photos from Special Assistant to the President Christopher Go showed. He also visited the wounded.

Mr. Duterte first visit to Marawi since the fighting broke out took place late last month, and he had then thanked the troops for their heroism.

Government casualties in the fighting have risen to 119. Mr. Duterte has promised to provide for their families. Members of the private sector have also donated funds to help their kin.

“I have to be here because I want all of you to know that… I love you. I hope you will be able to clean up Marawi City and get rid of the terrorists,” he said in his speech.

He hopes the government would lose no more troops in battle.

He also reiterated his promise to take care of their families, including setting up a trust fund for their children’s education.
“Yung promise ko na I will establish a trust fund of P50 billion when I go out of the presidency, that 50 billion will be dedicated solely to the education of your children,” he said.