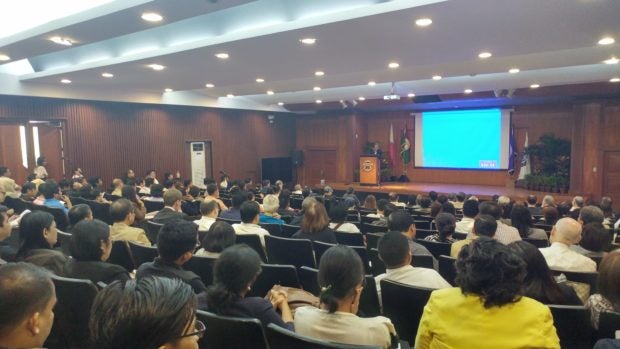 Law experts, government employees, professors, and students gather at the UP Diliman Malcolm Theatre for the first International Forum on Law and Religion in the Country on August 3, 2017. Photo by Daphne Crystal Umali/INQUIRER VOLUNTEER CORPS

(Editor’s note: The first break of the story mistakenly attributed the quote “We cannot build a country by killing people” to Dean Jose Manuel Diokno. The quote has been corrected and is attributed to Pastor Alvaro Senturias Jr. Our apologies for the mistake.)

Law experts and human-rights advocates on Thursday slammed President Rodrigo Duterte’s war on drugs saying that countries are not built “by killing people.”

“We cannot build a country by killing the people,” Pastor Alvaro Senturias Jr., of the United Church of Christ in the Philippines, said during the International Forum on Law and Religion held at the University of the Philippine’s Malcolm Theatre in Diliman.

“You cannot deny the fact that many poor people of this country have already been killed,” Senturia said. “Anything that denigrates or violates this image of God must be incompetent. We have to struggle against anything that de-humanizes man.”

He suggested that to obliterate drugs, the police operations which only “result in more and more killings,” should not target the “victims of the drug menace” but rather the distributors, importers, and manufacturers.

De La Salle University-College of Law Dean Jose Manuel I. Diokno defended human-rights advocates who have been constantly the target of Duterte’s ire.

“I don’t understand why some of the highest officials in the land can say that ‘oh this guy is a criminal therefore he’s not human and does not deserve human rights,'” Diokno said in one of the special sessions of the forum.

Diokno, who is one of the country’s foremost human-rights lawyers, described the extrajudicial killings as a “war against the human system” and “war on the rule of law.”

“It appears that human rights advocates and lawyers like me are being blamed for a situation which I believe we have nothing to be blamed for,” Diokno said.

“I think we are witnessing the great advent of political oligarchy, we really need people to stand up for our basic rights,” he added. 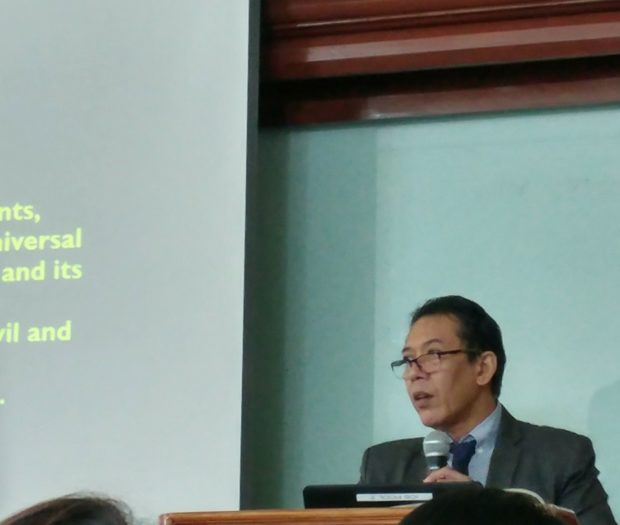 De La Salle University College of Law Dean Jose Manuel I. Diokno leads the session entitled “The Philippine Constitution viz. the Universal Human Rights” during the first ever International Forum on Law and Religion in the Country held at UP Malcolm Theatre on Thursday, August 3, 2017.” Photo by Daphne Crystal Umali/INQUIRER VOLUNTEER CORPS

Human Rights Watch released a report last March 2017 which estimated that more than 7,000 suspected drug criminals have been summarily executed since Duterte took office in July 2016.

The administration has also received criticism for alleged human-rights abuses such as the imprisonment of one of Duterte’s most vocal critic, Senator Leila de Lima.

Diokno, one of the lawyers of De Lima, described how the present society is being pervaded by fear.

He also said that the Supreme Court has not made any progress when he filed on her behalf a writ of habeas data to test the presidential immunity of Duterte and his sexual harassment and threats against the senator.

The forum is the first of its kind in the country and was attended by prominent law experts including International Criminal Court Judge Raul C. Pangalangan, Associate Justice of the Supreme Court Justice Marvic Mario Victor F. Leonen, and Former Solicitor General of the Philippines Florin T. Hilbay.

Senturias expressed his disbelief on Duterte’s plan to abolish the Commission of Human Rights, and questioned why he would do such a thing after the country signed international documents regarding human rights.

“No matter how powerful he might be, he cannot de-create something which is institutionalized,” Senturias said.

Pangalangan briefly discussed the history of religions and colonizations in the Philippines. He shared a story about his student’s reaction to the declaration of Islamic holidays-while people were happy having the holidays, it was strange to celebrate a holiday they could not understand.

“I responded that that’s exactly how our Muslim brothers and sisters felt years ago,” Pangalangan said, eliciting laughter from the audience.

“Religion is the soul, heart and opium of the people,” Pangalangan said.

The open forum, attended by almost 250 participants, was initiated by The Church of Jesus Christ of Latter-day Saints Philippines, Brigham Young University Law School and Philippine Center for Islam and Democracy (PCID).

Lawyer Salma Rasul, PCID executive director, said that whether we like it or not, religion influences everyone’s life.

“It is obvious that we need an intelligent discourse about it,” she said, also mentioning reproductive health and divorce issues.

Professor W. Cole Durham Jr., of Brigham Young University in Utah, presented how religion affects policies and how secularism affects religion. He said that “erosion” is happening to the right to religious freedom and that this right should have limitations prescribed by law to protect public safety, order, health, morals and the fundamental rights and freedoms of others.

“Freedom of religion has always been about finding ways to live together amidst differences in a pluralistic world,” Durham said, adding that this is a source of stability.

Durham also said that secularism may have two faces. One is to neutralize laws and policies to put rooms for practicing every religion. The other one is about anti-religious practices.  With a report from Yara Lukman/ Philippine Daily Inquirer / JPV

Read Next
Pacquiao wants ‘epal’ officials to stay out of government signages
EDITORS' PICK
UK’s Boris Johnson will resign, BBC reports
Unemployment rate up to 6% in May
Geek out at TOYCON 2022 powered by Smart Signature
High inflation: Your P1 is now worth only 87 centavos
High-risk pregnancy: Reducing your risk is in your hands
House energy committee chair Arroyo bats for cheap electricity
MOST READ
Suspect in grisly killing of missing woman in Bulacan arrested
Kim Atienza’s daughter flaunts bikini body in response to critics of her ‘revealing photos’
Japanese artist who created ‘Yu-Gi-Oh!’ found dead in the sea
FDA probes popular Filipino noodle brand for ‘high level of ethylene oxide’
Don't miss out on the latest news and information.