What is ‘ride-sharing’? Congress help sought to settle issues vs Grab, Uber 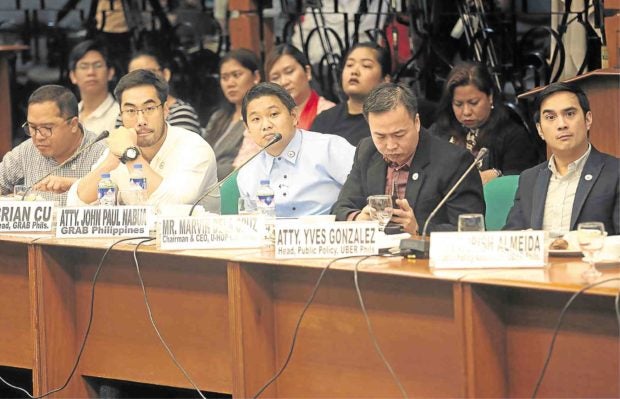 Congress was asked to clearly define “ride-sharing” in the law to better guide transport authorities in regulating and demanding accountability from app-based services like Grab and Uber amid complaints from regular taxi drivers and operators.

The call was made in a Senate hearing on Thursday by the Land Transportation Franchising and Regulatory Board (LTFRB), which noted that the two transport network companies (TNCs) had many partners operating fleets of vehicles like taxi operators.

“Ride-sharing should mean that if you own the vehicle, you are its driver. You have a day job … so you (spend only a certain number of) hours or probably your dayoff if you want to drive (a Grab or Uber car),” LTFRB board member Aileen Lizada told reporters after the four-hour hearing.

It was revealed during the hearing that one TNC partner, for example, operated 40 to 60 cars, Lizada said.

“That’s why we at the LTFRB raised this in the Senate and (House of Representatives). Can you please define ride-sharing when you craft your legislation. Because to us, ride-sharing means you own the car you are driving,” she said.

Sen. Grace Poe, chair of the Senate transport committee which called for the hearing, said the definition of ride-sharing would be tackled by a technical working group created to address issues involving TNCs, whose services have rapidly gained wide acceptance since their entry into the country about two years ago.

In Poe’s view, a TNC partner should have a franchise for only two to three vehicles.

“We should not agree to a ride-sharing that has a large fleet because it defeats the purpose of ride-sharing. Grab and Uber have agreed (to set a clear definition) and that they are doing this because we don’t have a regulation. And that is why taxi operators are angry,” Poe said.

Poe also called on Uber and Grab to stop accepting new applicants—or comply with a July 26 LTFRB order—as she noted that the board was still swamped with over 15,000 pending applications for transport network vehicle service (TNVS).

The senator said the two companies should not give new applicants “false hope.”

“I told LTFRB to resolve this because there are people who have invested there, there are drivers expecting,” she said.

Also in the hearing, Grab and Uber officials disputed criticism that their business had aggravated traffic congestion in Metro Manila.

Grab Philippines country head Brian Yu said there were about 5,000 to 8,000 TNVS on the road on an hourly basis but that 60 percent of their drivers are just part-timers who “go online during critical hours” in the morning and afternoon.

Uber head of policy Yves Gonzalez, meanwhile, noted that 40 percent of Uber riders use the Uber Pool option, which means “there is only one car on the road instead of three.”