US Court of Appeals decides fate of nation’s oldest synagogue 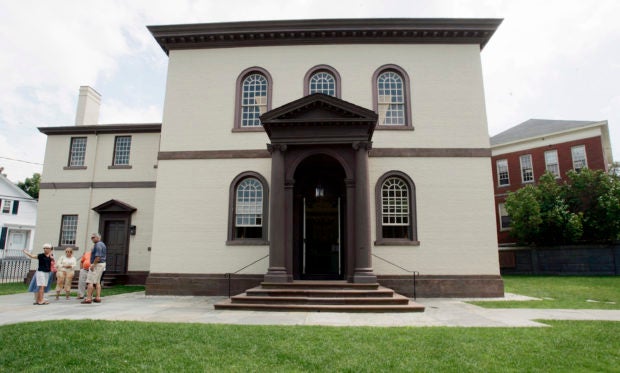 In this July 30, 2009 file photo, visitors stand outside the Touro Synagogue in Newport, Rhode Island. The 1st U.S. Circuit Court of Appeals in Boston announced Wednesday, Aug. 2, 2017, that the Shearith Israel had won its case over the ownership of Touro Synagogue in Newport, the nation’s oldest synagogue building. The appeals court ruled that Shearith Israel owns both the synagogue building and historical Jewish ritual objects that have gone with the synagogue. (AP Photo/Eric J. Shelton, File)

BOSTON—A federal appeals court in Boston has decided the fate of the nation’s oldest synagogue, overturning a lower court’s decision that put control of the building and a set of bells worth millions of dollars in the hands of the congregation that worships there.

Shearith Israel had appealed last year’s lower court ruling removing it as trustee of the 250-year-old Touro Synagogue. The judge at the time rejected the New York congregation’s arguments that it was the rightful owner of the bells and the synagogue.

An attorney for the Newport congregation said he was disappointed with the panel’s ruling.

“We are reviewing our legal options on behalf of the Touro Synagogue and Jeshuat Israel, the Congregation that has prayed there for over a century,” attorney Gary Naftalis said.

The synagogue, dedicated in 1763, is a national historic site that draws thousands of visitors each year.

By 1820, all of the Jews had left Newport, and Congregation Shearith Israel became trustee of Touro. It was reopened later that century as Jews began to move back to the city.

The dispute over ownership began when the Newport congregation, which was struggling with money, formed a plan to establish an endowment by selling the bells to the Museum of Fine Arts. The New York congregation objected, arguing that the sale would violate religious law and would be akin to selling a “birthright.” JPV