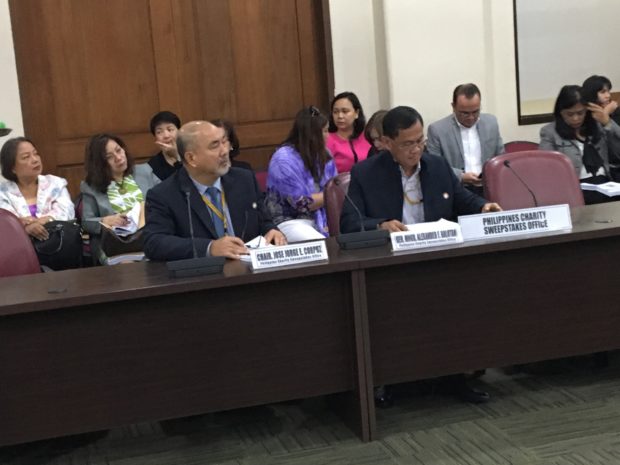 Although the Philippine Charity Sweepstakes Office has touted the five-fold expansion of small-town lottery operations under the Duterte administration as an antidote to illegal gambling, a lawmaker on Wednesday questioned if the government is indeed getting its rightful share.

PCSO Chairman Jose Jorge Corpuz told lawmakers that 92 STL operators have been accredited from the previous figure of 18.

“It is converting illegal to legal, so the government will benefit. We know there are illegal activities on the ground. We encourage them to be legal,” Corpuz said, adding that PCSO wanted to turn gambling lords into “gaming lords.”

However, Roque said this is also a “cause for alarm” because “we’re probably getting only the tip of the iceberg.”

“We know too that it’s an instrument of jueteng lords to enrich themselves,” he said, adding there’s “no way to ensure the amounts” since STL operations are practically outsourced to the employees of accredited agents.

“We conduct the lottery and allow them to accept the bets. They would determine how much they declare they made,” Roque noted.

Corpuz acknowledged the concern but appealed for lawmakers to “look at the bigger picture” since “we just opened the market.” He stressed the goal of turning gambling lords into “allies of the government.”

“The ones we’ll allow to enter, we’ll help play [the game]. After we control the game, that’s the time we will impose all the restrictions you want,” he said.

Roque pitched that the STL system should be computerized too to centralize operations in the hands of actual PCSO employees, unlike the current setup of letting accredited agents and their personnel who handle the bets because of the agency’s lack of manpower.

The PCSO is one of the government’s major revenue-generating agencies, having been mandated to contribute funds for the purposes of at least 13 Republic Acts.

However, PCSO asked lawmakers to consider reviewing the various laws for mandatory contributions for possible repeal or amendment. This would free up more funds for health-related and charitable purposes. JE