New Air Force One may come from bankrupt Russian firm 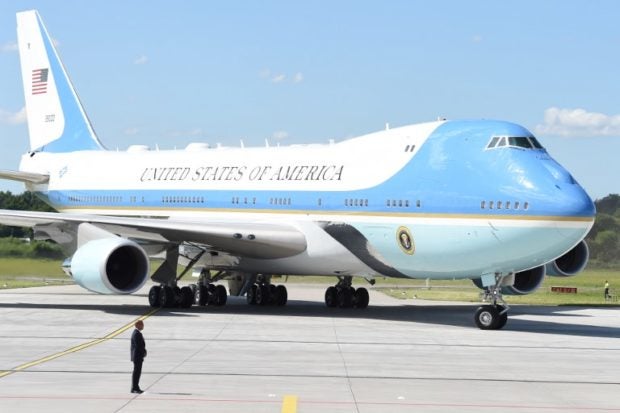 Air Force One carrying US President Donald Trump taxis upon arrival at the airport in Hamburg, Germany on July 6, 2017.  AFP FILE

WASHINGTON, United States — The US Air Force is about to buy two mothballed Boeing 747s that were abandoned by a bankrupt Russian airline — and convert these into the next Air Force One, a source said Tuesday.

The sale could save the Air Force millions of dollars, and comes after then president-elect Donald Trump said in December that the Air Force One replacement project costs were “ridiculous.”

Speaking on condition of anonymity, a source close to the deal told AFP that Boeing is set to sell a pair of 747-8 jetliners to the Air Force.

Air Force One is actually two planes — one for the president and a spare.

The planes had initially been ordered in 2013 by Russian airline Transaero but the firm went bust in 2015.

“This deal is focused on providing a great value for the Air Force and the best price for the taxpayer.”

A final deal could be announced in the coming weeks.

According to the Defense One news website, which first reported the deal, Transaero had initially ordered four Boeing jets before it went bankrupt.

Boeing had flight-tested two of the jets and they are now housed at the Southern California Logistics Airport, Defense One said.

The huge Mojave Desert facility is hot and dry, so airplanes there do not suffer corrosion.

Converting a pair of 747-8 jumbo jets to state-of-the-art luxury command centers by 2022 has been estimated to cost $3.2 billion, but overruns and delays could push the price tag higher.

Boeing sells 747-8s at about $390 million apiece, but defensive technologies, fancy interiors and other enhancements would massively add to the overall cost.

It remains to be seen if the Air Force will struggle with the optics of using formerly Russia-destined planes to become the flagship carrier of US presidents and an emblem of US power projection. CBB