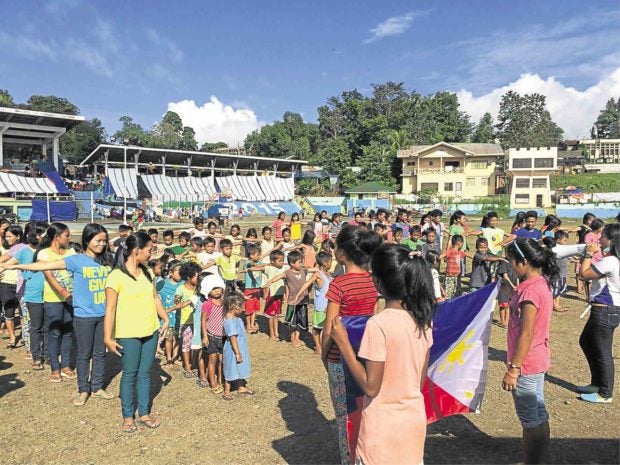 Students of Alcadev and TRIFPSS at a flag-raising ceremony before classes in an evacuation center in Tandag City where they fled after militia men attacked “Lumad” communities in Surigao del Sur. —NICO ALCONABA

DAVAO CITY—If the military bombs Lumad schools to heed one of President Rodrigo Duterte’s rants against communist guerrillas, it would blow up not only structures but also photos of Mr. Duterte.

Just like any public school, classrooms in Lumad learning institutions have photos of Philippine presidents, including Mr. Duterte’s.

But Armed Forces spokesperson Brig. Gen. Restituto Padilla said the military did not intend to bomb Lumad schools and that the President’s statement was just a strong appeal for communist rebels to stop using Lumad schools to brainwash children.

Mr. Duterte, when asked to clarify his statement, said he wanted only to “free the children from perdition.”

“I didn’t say I’d kill the children. Far from it, actually,” he said.

“You communists are perpetuating the violence in this country and I have to stop it,” he said.

But Malacañang had identified the Alternative Learning Center for Agricultural and Livelihood Development (Alcadev) in Lianga, Surigao del Sur, as among schools operating without a permit.

Alcadev, a secondary school that caters to Lumad students, started operating in Sitio Han-ayan in Barangay Diatagon, Lianga town in 2004.

TRIFPSS has been operating community schools since 1987 through the effort of former Tandag Bishop Ireneo Amantillo. There are a total of 22 TRIFPSS schools in Surigao del Sur, including the one in Sitio Han-ayan.

TRIFPSS won the Department of Education’s National Literacy Award in 2001 and 2005. Alcadev, on the other hand, was a finalist in the same contest in 2014.

On Sept. 1, 2015, thousands of Manobo Lumad from the towns of Lianga, Marihatag, San Agustin, San Miguel and Tago evacuated to Tandag City in Surigao del Sur, after members of a paramilitary group killed Emerito Samarca, executive director of Alcadev.

The evacuees returned to their homes only after Mr. Duterte became President.

“If the military bombs the Lumad schools, part of its target will be the President’s photos,” Michelle Campos, daughter of slain tribal leader Dionel Campos, told the Inquirer.

Instead of bombing the school, Campos said Mr. Duterte should go after those who killed her father.

The President also accused the Lumad schools of teaching children how to fight the government.

“We would beg to differ, Mr. President. Our school’s curriculum is an open book and we would very much appreciate it getting popularized. You can have a battalion of critics look over our educational framework,” Alcadev and TRIFPSS said in a statement.

Students in TRIFPSS schools and Alcadev also have a subject on agriculture, where they learn alternative farming methods.

“We try to give our children the necessary knowledge to develop critical minds and enable them to contribute to the development of society,” the statement said.

“We teach math to help them with their agricultural work, science that responsibly utilizes the wonders of nature and history with a progressive perspective, among other things,” it added.

Alcadev and TRIFPSS said that instead of attacking Lumad schools, the government “should provide opportunities for our communities to get the support we truly need during these trying times.” —Nico Alconaba