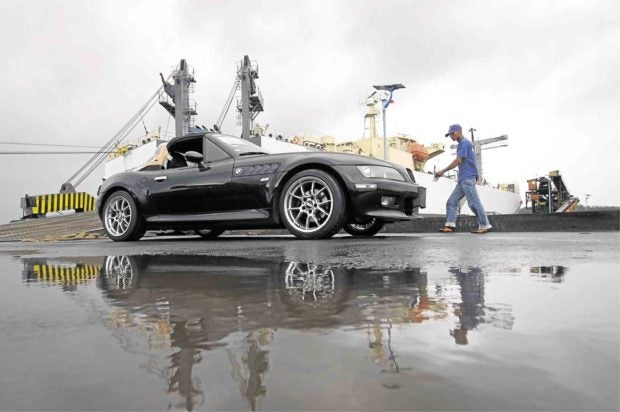 Port Irene became controversial in 2013 after the Customs bureau stopped the sale of secondhand cars, like this BMW sports car, from the Cagayan port. —RICHARD BALONGLONG

Lawyer Raul Lambino took his oath as Ceza administrator on Monday and announced plans to repair Port Irene, the main port of the Cagayan Special Economic Zone and Freeport (CSEZFP) in Barangay Casambalangan, by dredging its heavily silted seabed and by building more wharves to expand its capacity.

He vowed to transform the 54,000-hectare CSEZFP “into a bustling economic growth center and tourist destination and a major transshipment and logistics hub in northern Luzon.”

But Mamba said Lambino needed to stop “all illegal activities and corruption allegedly perpetuated by the past administration.” He also asked Lambino to reassess the viability of Port Irene as an international port.

“Billions of pesos in public funds have been poured into Port Irene, for which only a pittance was derived by government in the last 23 years of its existence. Transparency and accountability in its operation are seriously demanded,” he said.

In 2013, the sale of secondhand vehicles at the Cagayan free port was stopped after the Bureau of Customs (BOC) clamped down on the trade by refusing to issue import permits for their release and registration.

The BOC had cited a Supreme Court ruling that nullified an executive order that Ceza used as basis for the importation. About 900 secondhand vehicles imported from Japan and South Korea remained parked at a 5-hectare depot in Casambalangan following the BOC action.

Port Irene was also the site for shipping magnetite sand, which was stopped in 2014 following the departure of Chinese companies that were earlier granted permits to extract black sand from the coastal and riverbank communities of northern Cagayan.

According to government records, these companies shipped out more than 2.4 million tons of magnetite from Cagayan to China through Port Irene from 2009 to 2014.

Two of CSEZFP’s biggest licensees for its gambling operations—Eastern Hawaii Gaming and Leisure and Meridien Vista Gaming Corp.—have been dragged in lawsuits and investigations over alleged money laundering and illegal operations.

Santa Ana Mayor Darwin Tobias, who sits as Ceza board member, said Lambino should look into the alleged mess that was left behind by his predecessor so he could “start with a clean slate.”

“He should be wary whom he trusts (within Ceza) because there are some people there who are behind all the anomalies that had hounded the agency for many years,” he said.

“As President Duterte’s personal choice, I will lead by example and turn the [CSEZFP] into his vision of a vibrant economic growth center that is efficient and clean and free of corruption,” Lambino said in a statement.

He said he would upgrade power supply and internet connectivity at the free port and put up a “railway alignment from Tuguegarao to the town of Lal-lo and to Santa Ana for both commuter and cargo services linking up with the rest of Luzon.”

The CSEZFP spans the whole of Santa Ana as well as the islands of Fuga, Barit and Mabbag in Aparri town.

“Its strategic location at the northern tip of Luzon’s eastern seaboard, along major international shipping routes, could easily make the free port a major transshipment and logistics point for trade in the Asia-Pacific Rim,” Lambino said.