P77B bridge, airport, dam to be built by Duterte gov’t in W. Visayas 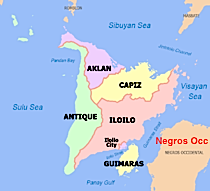 ILOILO CITY — The bridge network connecting the islands of Panay, Negros and Guimaras will be among infrastructure projects to be implemented under the Duterte administration, the National Economic and Development Authority (NEDA) has announced.

The P27.15-billion bridge project connecting the three islands is among the three major projects for the region costing a total of P77 billion, according to Ro-ann Bacal, NEDA Western Visayas director.

The others are the improvement of the Iloilo International Airport totaling P30.4 billion and the P19.3-billion Panay River Basin Integrated Development Project, a multi-purpose megadam project in Capiz.

The detailed engineering study of the bridge project is expected to be completed within the year so that the projected cost and funding options can be finalized.

“This will definitely push through,” Bacal told the Philippine Daily Inquirer.

China and Japan have expressed interest in funding the project through the Official Development Assistance. Funding will be determined by the Department of Finance, according to Bacal.

Proposals to connect the three islands with a bridge network have been pushed since the administration of former president and now Pampanga Rep. Gloria Macapagal-Arroyo.

In a study conducted by the Department of Public Works and Highways in 2010, the cost of the project was estimated to reach P28.496 billion covering 13.16 kilometers of a bridge network.

This includes 3.6 km for the Panay-Guimaras bridge at P9.438 billion and a 9.56-km bridge to connect Guimaras and Negros costing P19.08 billion.

Economic planners believe the bridge network will significantly boost the economies of the three islands with faster and easier transport of people and goods.

The Iloilo International Airport in Cabatuan town will undergo major improvements under a P30.4-billion project.

These will include improvements in its terminal building, baggage carousel, among others.

It involves the construction of a multipurpose megadam that is aimed at addressing perennial flooding and providing additional power in the province.

Bacal said road projects would be implemented to cover gaps in the national road networks.  SFM