5 bodies found in Basilan, believed to be those of anti-terror supporters | Inquirer News
Close
menu
search

5 bodies found in Basilan, believed to be those of anti-terror supporters 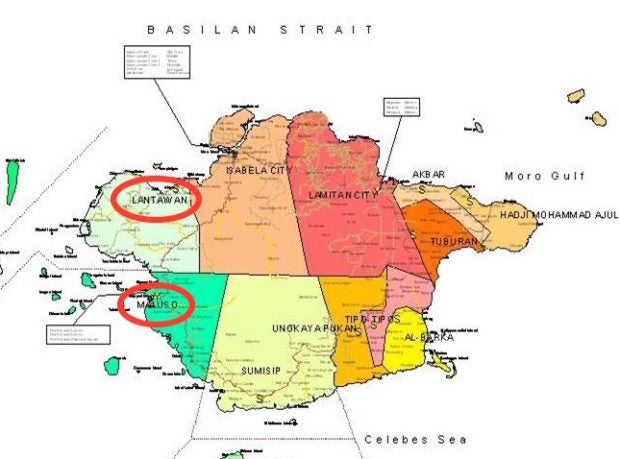 Map of Basilan province, with highlights on Maluso and Lantawan towns (Wikipedia maps)

ZAMBOANGA CITY — Five bodies, three of them headless, were recovered in Basilan on Saturday.

Colonel Andrew Bacala, commander of the 4th Special Forces Battalion said the bodies were believed to belong to farm workers and militia forces who had been supportive of the government’s anti-terrorism campaign in Basilan.

But Bacala said they could not identify the bodies as these were already in an advance stage of decomposition.

The bodies were recovered more than a kilometer away from where two beheaded bodies were found on Friday afternoon.

“We had a hard time retrieving the bodies. Our men attempted to secure one cadaver. It turned out that the body was rigged with bombs, so we had to diffuse it,” Bacala said.

On Friday, two headless bodies were recovered in the boundary of Barangay Switch Yakal in Lantawan town and Barangay Garlayan in Maluso town.

The bodies were identified as that of local businessman Dodong Divinagracia and his son Ily, who were taken by suspected Abu Sayyaf men in Maluso on July 20.

A few hours after taking the father and son, five men – three farmers and two militia members – were taken from Switch Yakal.

The military could still not say if the bodies recovered belonged to  the latest kidnap victims.  SFM