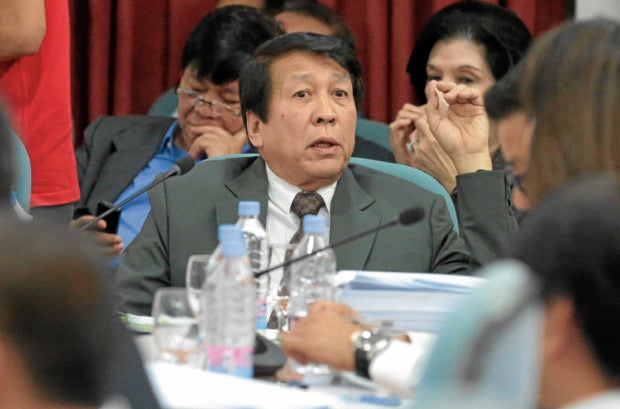 Did lawyer Mandy Anderson, the chief of staff of Customs Commissioner Nicanor Faeldon, deliberately leak photos of her Facebook post calling Speaker Pantaleon Alvarez an “imbecile” to deflect public attention from the multibillion-peso smuggling of “shabu” (methamphetamine hydrochloride) through the Bureau of Customs (BOC) express lane?

Was the leak the perfect opening Anderson sought to accuse Alvarez of influence-peddling when he allegedly tried to get an “unqualified” Customs official promoted?

This was the conclusion drawn by Majority Leader Rodolfo Fariñas, who confronted Anderson about her Facebook post during the House ways and means committee hearing on Wednesday.

In a group message to House reporters, Fariñas cited the timeline of events to show that Anderson’s allegations against the Speaker were part of “clear machinations to cover up the smuggling of P5 billion of shabu” from China.

Anderson however described Farinas’ conclusion as “an absurd allegation not backed by a single piece of evidence.”

She added that the “theory would not only be an insult to the other members of the House, but would truly [show] the sad state we are living in, if our elected representatives can be distracted from a major shabu smuggling issue just because of the Facebook post of a ‘nobody.’”

In a June 16 Facebook post where she shared an Inquirer story about Alvarez’s threat to dissolve the Court of Appeals over an interbranch spat in the case of six detained Ilocos Norte officials,  Anderson wrote: “I’m hoping and praying he tries so he realizes what an imbecile he is when he fails.”

She added: “Isn’t there anyone else in the House composed of 200-plus representatives who can actually be Speaker? Nakakahiya na (It has become embarrassing).”

On July 25, “or a day before the hearing on drug smuggling, several House members received a copy of Anderson’s  ‘imbecile’ post,” Fariñas said.

“Who could have leaked her private post if not she herself and her cohorts in order to divert the public from the House investigation of the successful smuggling of more than P5-billion worth of shabu through the BOC Express Lane?” the House official said.

“Hindsight is the best sight—isn’t the dragging of the name of the Speaker by AA (Attorney Anderson) a clear attempt to divert the issue on the BOC’s ineptitude, given all the former military officials in its leadership? Were it not for China’s apprehension in Xiamen of the source of the shabu and its alerting the BOC of the smuggling of almost a ton of shabu, the BOC’s ‘Express Lane’ would have successfully facilitated P5-billion worth of shabu into our country,” Fariñas said.

Anderson, who said her “imbecile” comment was on a “private” page, later apologized for the post, but explained in an interview after the hearing that her beef with Alvarez had started in May after the Speaker tried to get a BOC official promoted to Customs operations officer 5.

The BOC official said she refused after learning that the officer, later identified as a certain Sandy Sacluti, was not qualified for the promotion.  The Speaker later called her to his office and berated her, Anderson said.

She added that Alvarez’s staff started sending her threatening messages and in a phone call, supposedly told her that the Speaker’s marching orders were to “bring hell to [her] and the commissioner.”

Alvarez earlier denied the allegation, calling it a figment of Anderson’s imagination.  But on Friday, he confirmed that he had indeed endorsed a Customs officer for promotion in a May 15 letter to Customs Commissioner Faeldon. But it was not “lobbying,” the Speaker said; just one of his many routine recommendations.