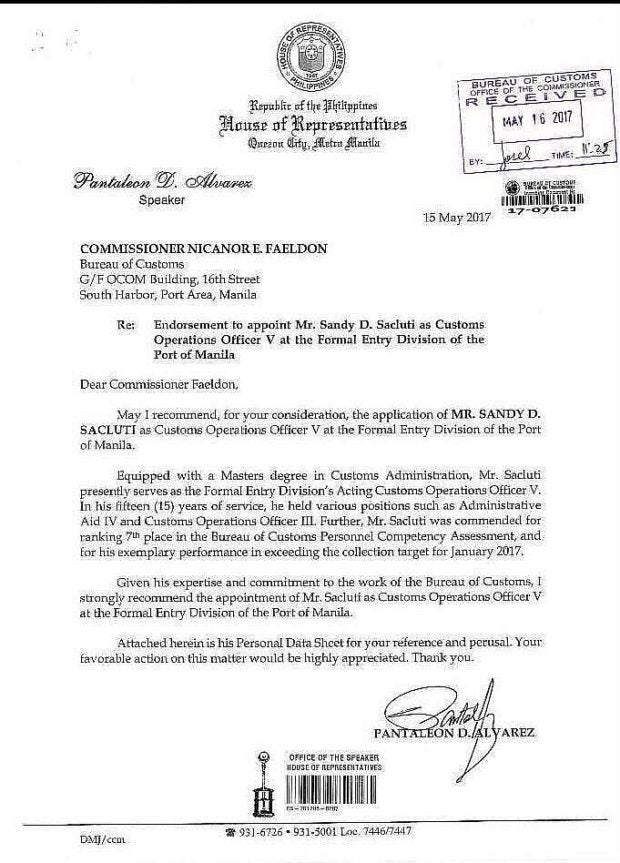 Speaker Pantaleon Alvarez on Friday confirmed endorsing a customs officer for promotion at the Bureau of Customs (BOC) but denied this was a case of “lobbying,” arguing it was only one of his many routine recommendations.

He also denied the claim of Customs Commissioner Nicanor Faeldon’s head executive assistant Mandy Anderson that he gave his staff marching orders to “bring hell to me and the commissioner.”

“Yes I did. I sign so many recommendations each day sa dami ng nagpapatulong but until there lang,” Alvarez said.

He replied, “NO,” to a question on whether this should be considered lobbying.

On Anderson’s allegation that Alvarez’ ordered his staff to “bring hell” to her and Faeldon, Alvarez said: “I never said about hell. Guni-guni lang nya yun (That’s only her imagination)!”

In the May 15 letter leaked to House reporters and bearing the letterhead of the House of Representatives, Alvarez cited Sacluti’s masters degree in customs administration and his ranking seventh in a personnel competency assessment of customs personnel in January.

“Given his expertise and commitment to the work of the Bureau of Customs, I strongly recommend the appointment of Mr. Sacluti as Customs Operations Officer V at the Formal Entry Division of the Port of Manila,” Alvarez said.

The Speaker said the controversy should not detract from the real issue on illegal drug shipments arriving in the country and bypassing scrutiny from the BOC.

It was during Wednesday’s hearing by the House ways and means committee when Anderson got a tongue-lashing from lawmakers for a Facebook post in which she called Alvarez an imbecile.

She later told a radio interview the insult had been prompted by a previous run-in with Alvarez when the latter tried to get an “unqualified” person promoted at the BOC.

“They persisted. And then I was called to [the Speaker’s] office. He scolded me,” said Anderson, a bar topnotcher and co-alumnus of Alvarez and Majority Leader Rodolfo Fariñas at the Ateneo Law School.

Anderson said she got threatening text messages from his staff, as well as a call from Alvarez’ executive assistant who supposedly told her that the Speaker’s marching orders was “to bring hell to me and the commissioner.”

“So I said I’m just the commissioner’s staff, and I do what I’m told. So there, if it’s really wrong, we will not do it because of the reforms and anti-corruption drive in BOC. The commissioner and I have zero tolerance for this,” she said.

In a June 16 post accompanying an Inquirer story about Alvarez’ threat to dissolve the Court of Appeals in connection with the inter-branch spat over the six detained Ilocos Norte officials, she wrote: “I’m hoping and praying he tries so he realizes what an imbecile he is when he fails.”

“Isn’t there anyone else in the House composed of 200-plus representatives who can actually be speaker? Nakakahiya na (It’s embarrassing l already),”

Anderson apologized to the lawmakers but did not include the Speaker in her apology.