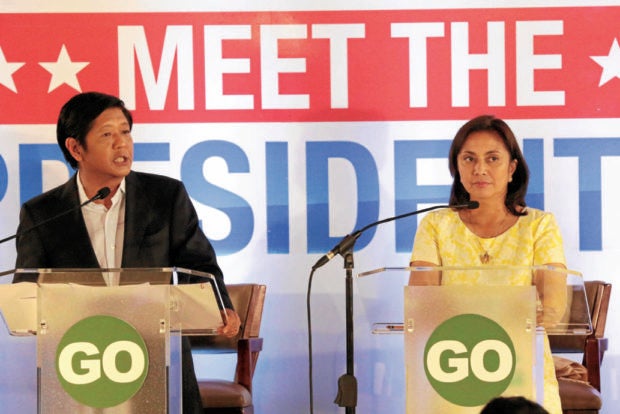 ABSENCE OF TEMPLATE Chief Justice Maria Lourdes Sereno has expressed apprehension about
the absence of “a template for addressing the kind of protest” filed by former Sen. Ferdinand
Marcos Jr. over the victory of Vice President Leni Robredo. —INQUIRER FILE PHOTO

The possibility that the protest filed by former Sen. Ferdinand Marcos Jr. over the slim margin of victory by Vice President Leni Robredo could put into question the result of the entire election process last year has worried some Supreme Court justices.

The concern emerged during the preliminary conference of the court, sitting as the Presidential Electoral Tribunal (PET), on July 11, according to a transcript of the proceedings made available to the Inquirer.

Chief Justice Maria Lourdes Sereno expressed apprehension about the absence of “a template for addressing the kind of protest” the namesake son of the dictator Ferdinand Marcos had lodged.

At the center of the controversy is the “first course of action”—three were raised—in which Marcos urged the PET to “declare as unauthentic” all the certificates of canvass used by both chambers of Congress in proclaiming Robredo as the winner with a margin of more than 200,000 votes.

“If you were to succeed in proving the first cause of action, wouldn’t that put into question the results of the elections of everybody else, both national and local,” said Associate Justice Alfredo Benjamin Caguioa.

“Are you sure that this country is willing to face the consequences of a decision in your favor?” asked Associate Justice Marvic Leonen.

Marcos listed three causes of action in his protest.

The first was about the automated election system (AES). Marcos said the vote-counting machines (VCM) supplied by Smartmatic and contracted by the Commission on Elections (Comelec) had no “demonstrated capability” nor was it ever successfully used in a prior electoral exercise either in the Philippines or in any other country.

The second part of the Marcos petition delved into the more “traditional” modes of cheating, like vote-buying, preshading, intimidation and failure of elections, among others.

Marcos is also asking the PET to annul the election results in Lanao del Sur, Basilan and Maguindanao where the ballots allegedly had been preshaded, and a recount of those from 22 provinces and five cities.

The third part of the protest focused on the alleged unauthorized introduction by a Smartmatic technician of a new hash code (or a new script/program) into the transparency server as well as the effects brought about by the unauthorized change.

Marcos was leading by more than a million votes in the count in the early hours after the polling closed,  but his lead over Robredo vanished overnight after the introduction of the new hash code, according to his lawyers.

“We are fully aware of the divisiveness that can be created by this election protest,” said Marcos’ lawyer, George Garcia.

He stressed that his client wanted to avail himself of the right guaranteed in the Constitution. “We will fully complete the entire process.”

“As far as issues pertaining to the authenticity and due execution of the certificates of canvass of votes and proclamation, jurisprudence said that it should only affect the position as involved in the subject protest,” Garcia explained, referring to the vice presidential contest.

Garcia maintained that the effect should be on the only contested position.

In a statement, Robredo’s lawyer, Romulo Macalintal, expressed apprehension that on the first cause of action alone sought by Marcos the process could take more than one year to resolve.

“The problem here is that Marcos has not specified in his protest and in his preliminary conference brief what specific violations were committed by the Comelec and Smartmatic that could have affected the integrity and reliability of the 2016 automated election system,” Macalintal said,

He said Marcos should have accepted the suggestion of the PET to withdraw his first cause of action to expedite the resolution of his protest.

Macalintal added that Marcos also was not sure how and where to start in his election protest.

While the Marcos camp had identified three pilot provinces to start the process, Macalintal said Robredo’s rival had asked the PET to allow the former senator to reserve the right to change areas.

“Clearly, Marcos is not sure where and how to proceed with his protest and that he is merely fishing for evidence. Such reservation is not allowed under PET rules,” Macalintal said.