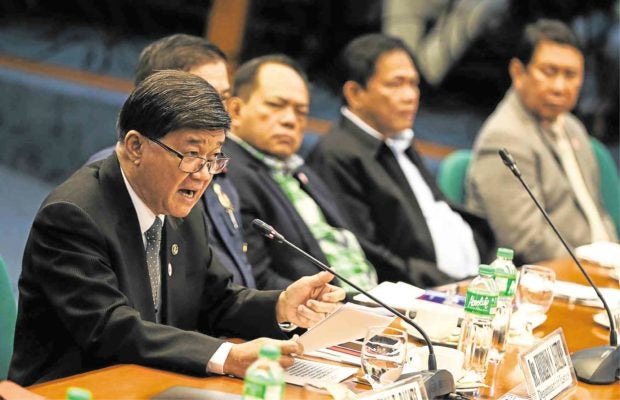 Justice Secretary Vitaliano Aguirre II on Thursday stood firm on his order for the immediate return of the “Bilibid 19” to the state prison’s maximum security compound despite the possibility that some of them might retract their testimonies linking Senator Leila de Lima to the illegal drug trade.

Aguirre denied an appeal  from some of the high profile inmates to let them stay in the medium security compound. He also brushed off the possibility that they might retract their testimonies against De Lima.

“That is a misinformation campaign in the media by the other camp,” he said.

At the same time, Aguirre announced that he would be personally supervising the Bureau of Corrections (BuCor) which oversees the New Bilibid Prison (NBP), weeks after admitting a resurgence in the drug trade at the national penitentiary.

“I already issued the department order where I said they should be transferred immediately. But apparently, the officers here did not abide by my order,” Aguirre said.

Among those facing transfer to the maximum security compound are convicted drug lords Vicente Sy, Jojo Baligad and Peter Co who testified before a legislative inquiry last September that De Lima knew about their illegal activities at the NBP.

De Lima has been detained at the Philippine National Police headquarters on drug-related offenses since February.

On Wednesday, lawyer Francis Acejas III who said he was representing Sy, Baligad and Co, held a press briefing to air his clients’ appeal. According to him, his clients were worried about their safety should they be returned to the maximum security compound.

Although admitting that there was a “possibility” of some of the inmates recanting their testimonies against De Lima, Acejas stressed that this was not likely to happen because they wanted to help the government in its campaign against drugs.

After Aguirre’s announcement about the revival of the drug trade at the NBP. BuCor director general Benjamin de los Santos resigned.

In an order dated July 26 but released on Thursday, Aguirre said De los Santos was on an “indefinite leave of absence” and would be replaced by an officer-in-charge.

Aguirre, however, declared that he “shall directly supervise the management and operations of the BuCor which are not within the ministerial powers of its officer-in-charge” until “further orders or until a new director general has been appointed.”