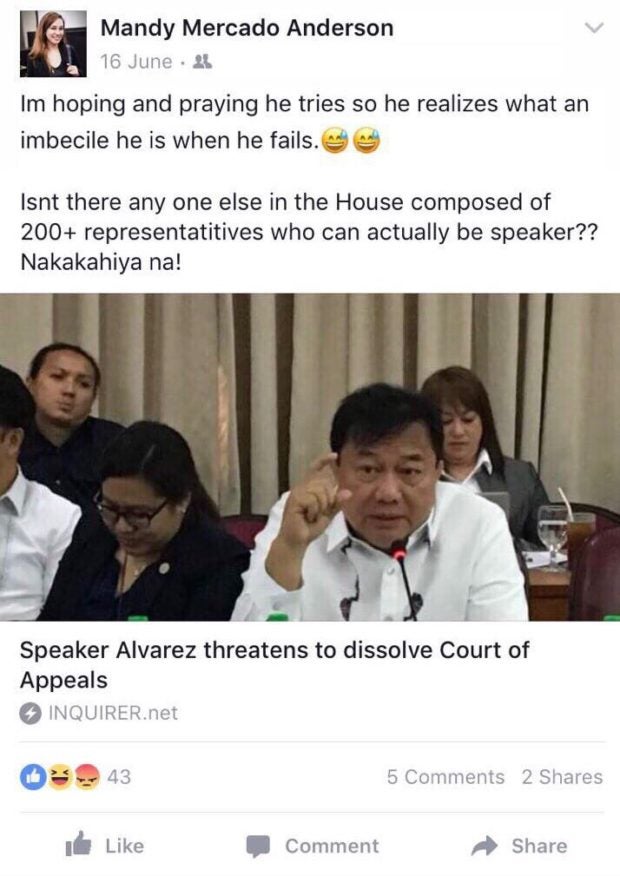 The chief of staff of Bureau of Customs (BOC) commissioner Nicanor Faeldon got a scolding at the House of Representatives for calling Speaker Pantaleon Alvarez an imbecile in a Facebook post.

Mandy Mercado Anderson faced a dressing down by Majority Leader Rudy Fariñas during a House inquiry on Wednesday into the P6.4 billion “shabu” confiscated by the BOC at a warehouse in Valenzuela City.

This after Fariñas received word about Anderson’s Facebook post commenting on an Inquirer article about Alvarez’s threat to dissolve the Court of Appeals.

“I’m hoping and praying he tries so he realizes what an imbecile he is when he fails,” Anderson said in her post dated June 16 where she shared the Inquirer article “Speaker Alvarez threatens to dissolve Court of Appeals.”

“Isn’t there anyone else in the House composed of 200+ representatives who can actually be speaker?? Nakakahiya na!” she added.

“This was sent to me by a lot of members because they were taken aback. I could not believe it myself that a government official would do it,” Fariñas said.

“Do you believe as a government official, you can call out the fourth highest official of the land an imbecile?” Fariñas asked Anderson.

“I believe I have the freedom to express my opinion regarding our elected officials,” Anderson replied.

Fariñas said he was irked at Anderson who kept on smiling as she was being grilled.

“You want to be funny? Because I can erase that smirk off your face if you want,” Fariñas told Anderson, who quickly put on a serious face.

Fariñas said Anderson put the House in a bad light, and that it is well within the powers of Congress to abolish the Court of Appeals.

“Why do you call the Speaker an imbecile? The Congress has the power to abolish the CA because the CA is a creation of Congress,” Fariñas said.

“Until this matter is sufficiently explained to the House, I will move that the BOC receive zero budget for the coming year,” Quimbo said.

“There is no way that a group of 290-plus imbeciles will approve the budget of an agency that calls it idiotic. There’s just no way,” he added.

For his part, Faeldon said he chose Anderson as chief of staff because she was top five in the bar and is certified public accountant (CPA).

Anderson apologized to the lawmakers, adding that she did not intend to insult the House and the Speaker.

She said she was just “angry at that time over several issues.”

Faeldon said he will submit an official report on the incident today. CBB/rga