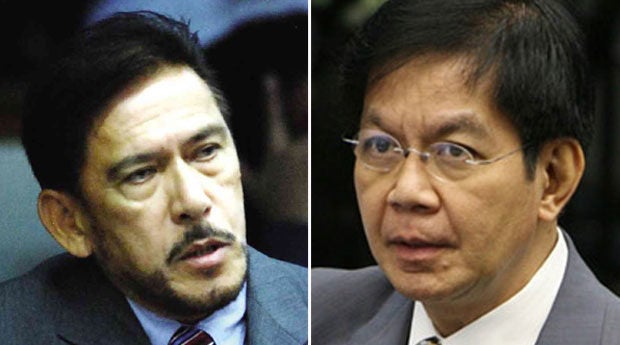 Senate Majority Leader Vicente Sotto III and Sen. Panfilo Lacson were role models for attendance and punctuality during the first regular session of the 17th Congress, scoring perfect attendance in all 89 session days of the Senate from July 2016 to May this year.

The Journal Service reported that both Sotto and Lacson achieved a clean attendance record, with no records of tardiness, sickness and official missions throughout the first regular session.

The Senate and House of Representatives reconvened on Monday for its second regular session, which will end in June 2018.

Senators Risa Hontiveros and Gringo Honasan came in second, responding to the roll call 88 times and arriving late once.

At the bottom of the list is former Sen. Alan Peter Cayetano, now foreign secretary, who recorded the biggest number of absences. He attended only 31 session days from July 25, 2016, to May 31, 2017, journal records show.

Of the number of times he showed up for work at the Senate, Cayetano arrived late or after the roll call 10 times.

The data also showed that he was on official mission for more than half of the time, going on 34 local and 17 foreign trips. He was also marked absent once. The remaining six days, however, were unaccounted for.

Cayetano was confirmed as the country’s top diplomat on May 17, or 14 days before Senate adjourned sine die.

The other lawmakers who fared better in attendance were Senators Francis Escudero and Richard Gordon at 86 days, and Senators Nancy Binay, Sherwin Gatchalian and Joel Villanueva. They were all present for 85 session days.

Unlike his dismal attendance record at the House of Representatives, Sen. Manny Pacquiao has managed to show up 84 times for work in the Senate, although he came in late 15 times. He had three official missions and two absences.

Senators Cynthia Villar and Grace Poe were present for 80 and 79 session days, respectively.

Sen. Joseph Victor Ejercito was present for 77 out of the 89 session days, arriving late four times. He missed 12 session days as he was put on preventive suspension last year for an alleged anomalous firearms deal when he was still San Juan City mayor in 2008.

He was acquitted of the charges, leading to the lifting of his 90-day suspension in Dec. 2016.

Before her arrest, data showed that De Lima responded to the roll call on 55 session days and arrived late on four session days. She was on official mission four times and was marked sick three times.

Sen. Antonio Trillanes IV topped the list for tardiness, arriving after the roll call 26 times out of the 72 session days he was present.