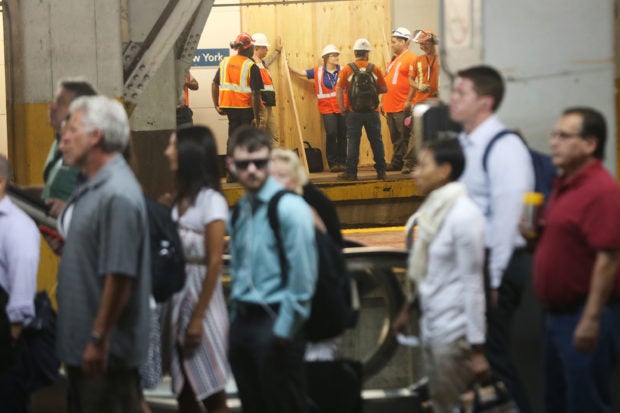 Commuters walk by track workers at Pennsylvania Station on the first morning of a long planned track repairs at the station, one of the busiest in the nation on July 10, 2017 in New York City. Commuters throughout the New York area are preparing for long delays and the use of alternate forms of transportation as the number of trains into Manhattan is being drastically reduced for the summer work. AFP

New York’s beleaguered subway system outlined Tuesday a rescue plan of $800 million with another $8 billion in the long-term to battle chronic delays, breakdowns and overcrowding, promising to haul the system into the 21st century.

Nearly six million people each day ride the subway, which dates back 113 years and suffers outdated equipment despite being one of the largest public transit systems in the world spanning 665 miles (1,070 kilometers) of track.

The chairman of the state-run Metropolitan Transport Authority admitted that the subway was “in distress” and conceded there was “no doubt the New York City subway is failing its customers.”

“In order to stabilize the system, our current estimate is that we are going to need an immediate investment of $456 million in operating costs and make a $380 million capital investment,” Joseph Lhota told reporters.

State Governor Andrew Cuomo and New York Mayor Bill de Blasio, both Democrats, have struggled to come to terms over the crisis. The MTA is directly answerable to Cuomo but the city has also contributed funds.

On Tuesday, Lhota urged the state and the city to share the cost.

“After the stabilizing plan, a long-term plan will require an additional capital investment of approximately $8 billion,” he said.

The rescue plan includes a pilot program to remove seats on at least two lines to cram more passengers into each car, which has attracted scathing commentary.

It also calls for expedited repairs and an increased police presence to deter sexually inappropriate behavior, loitering, aggressive panhandling and littering, which contributes to 700 fire-related delays a year.

The MTA has also launched an international competition “calling on the greatest minds” to find solutions to modernize and improve the subway.

Derailments in the last two months forced the evacuation Friday of 135 passengers and left 36 people with minor injuries in June when two subway cars careened off the tracks, leaving hundreds of people stuck for more than an hour.