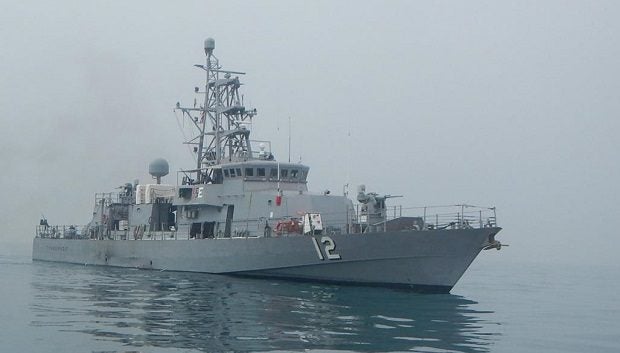 The USS Thunderbolt (PC 12) opened fire on an Iranian vessel that allegedly ignored warnings while trying to go near the American patrol ship. The US Navy said the incident happened north of the Persian Gulf on Tuesday, July 25, 2017. USS THUNDERBOLT PC-12 FACEBOOK PAGE

WASHINGTON, United States — A US Navy patrol ship fired warning shots Tuesday at an Iranian Revolutionary Guard Corps boat in the Gulf as it closed in on the American vessel, officials said.

The shots were fired after the Iranian vessel came within 150 yards (137 meters) of the USS Thunderbolt and failed to respond to repeated attempts to reach it via radio, then ignored warning flares and a series of blasts on the US ship’s whistle, the Navy said in a statement.

The Navy released video showing part of the incident, during which two bursts of machine gun fire can be heard.

Events unfolded around 3:00 am (0000 GMT) in the northern Gulf. After the US ship fired the warning shots, the Iranian vessel stopped, officials said, at which point the Thunderbolt continued on her way.

The Revolutionary Guards accused the Americans of “provocation and intimidation” and said it was the US ship that had approached the Iranian vessel.

“The Guards’ boat did not pay attention to the unprofessional and provocative move and continued with its mission. The American ship left the area shortly afterwards,” the guards’ naval forces said in a statement.

The episode marks the latest in a series of close encounters between US ships and Iranian naval vessels.

In January, the USS Mahan destroyer fired warning shots at four Iranian Revolutionary Guard vessels that approached at high speed in the Strait of Hormuz.

The Iranian Revolutionary Guards Corps is a paramilitary force that answers directly to the Islamic republic’s supreme leader.

The force’s boats periodically approach US warships in international waters and the Strait of Hormuz, ignoring US radio messages and giving little indication of their intentions.

In January 2016, the Iranians briefly captured the crew of two small US patrol boats that strayed into Iranian waters.

The 10 US sailors were released 24 hours later.

Tuesday’s incident comes as the US House of Representatives passed sanctions against Iran and the IRGC navy — which stands accused of supporting terrorism. The bill also targeted Russia and North Korea. CBB