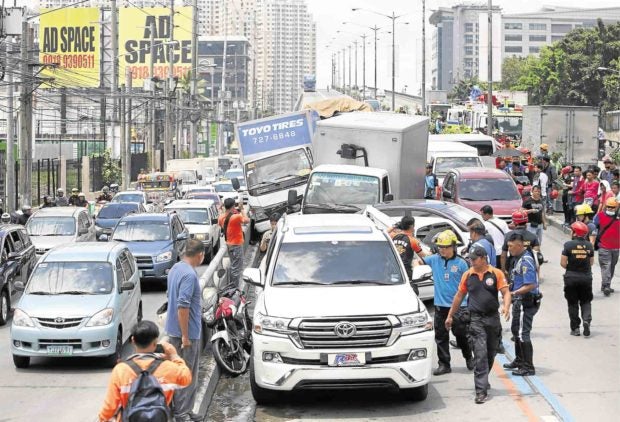 Traffic slows down to a crawl after 18 vehicles end up in a multiple fender-bender after a truck loses its brakes on the C5 Ortigas flyover on Tuesday morning. —Lyn Rillon

A motorcycle driver died while two other people were hospitalized after a driver lost control of his 10-wheel truck which hit a sport utility vehicle, triggering a chain reaction that led to an 18-vehicle pileup.

The accident happed at 10:25 a.m. Tuesday on the northbound lane of the C-5 Ortigas flyover in Barangay Ugong, Pasig City.

SPO1 Erwin Lombredas, case investigator of the Pasig City police Vehicle Traffic Investigation Unit, identified the lone fatality as Jeffrey Llanza based on the cell phone recovered from the victim.

The police said that due to the impact, Llanza fell off his motorcycle and ended up under a van. He was immediately rushed to The Medical City where he was declared dead on arrival due to his severe injuries.

The 30-year-old Llanza, a crane operator, left behind two sons aged 4 and 2.

As of this posting, his body remains at Funeraria Quiogue as his family was still waiting for the help promised by the truck driver’s company.

Two other people were taken to separate hospitals for treatment. One complained of high blood pressure while the other suffered some injuries although both were reported to be in stable condition.

Based on the police’s initial investigation, the 10-wheel truck (PFY 692) carrying animal feed and being driven by Juan Mirabueno was on its way to Bulacan province when the accident occurred.

At that time, the truck was traveling on the downward sloping portion of the flyover.

Mirabueno, a driver of Solid Gold Trading, told reporters that when he spotted heavy traffic in the lane ahead of him, he tried to stop the truck but the brakes failed to work. He stressed that he was running at average speed.

The truck then hit the vehicle in front of it, a Toyota Fortuner being driven by Jelson Rosales.

The collision set off a chain reaction which ended up involving 16 other vehicles, including several trucks, vans, cars, two motorcycles and two taxi cabs.

Mirabueno immediately surrendered and was taken into custody by the Pasig police. He faces a charge of reckless imprudence resulting in homicide with multiple physical injuries and damage to property.