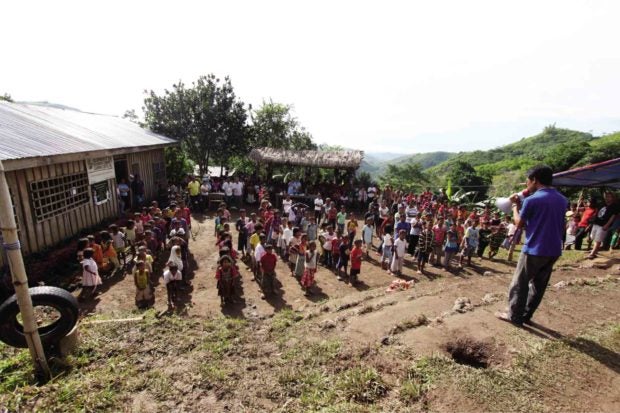 MANILA — A left-wing party-list group has demanded that President Duterte take back his threat to bomb Lumad schools which he claimed were not permitted to operate.

“We demand that the President retract his statement.  We demand justice for all victims of militarization of communities, including the thousands of bakwits due to martial law.  We demand that he order the military to pull out of civilian communities and end all forms of attacks against Lumad schools and people’s organizations,” their statement read.

By accusing the tribal schools of training children to become rebels, the President effectively ordered the military to continue branding innocents and their institutions as communist guerillas, the two congressmen said.

They described Mr. Duterte’s actions as a “clear red-tagging on a large scale.”

“It is an order for the AFP to target civilians as rebels, and to intensify the militarization of their communities, the threats, intimidation, extrajudicial killings, enforced disappearances, torture, and charging of trumped-up cases against students, teachers and tribal leaders, and the encampment and destruction by the military of schools,” they said in their statement.

They added that some tribal schools have long been operating with the Department of Education’s recognition.

Yet, people’s organizations and local community members have to maintain other schools and learning centers “due to the absence of public schools offering free education in their area.”

The lawmakers added that many applications have even been denied by the government “as part of the systematic attack against indigenous peoples which the President is now openly advocating.”

Alternative Learning Center for Agricultural and Livelihood Development, whose executive director was killed allegedly by military units in 2015, even won the DepEd’s National Literacy Award in 2001 and 2005.

“President Duterte should encourage and protect them instead of targeting them as ‘enemies of the state,’” ACT Teachers said.

Meanwhile, National Union of People’s Lawyers President Edre Olalia said “openly threatening to bomb Lumad schools is as monstrous as it can get.”

Mr. Duterte said in his post-State of the Nation Address press conference: “Those schools of the Lumad, they are operating without the Department of Education’s permit because in their schools, they are teaching subversion, communism, everything. So get out, I will bomb those. I will include your structures. I will use the Armed Forces, the Philippine Air Force.”  SFM