Thousands show up at Duterte protest outside Batasan 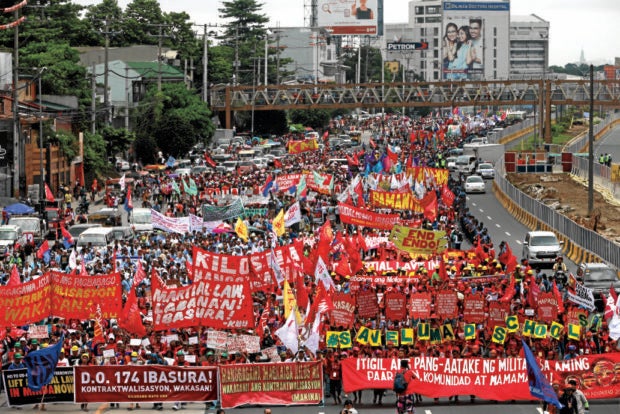 Thousands of protesters from different groups carrying placards and flags along Commonwealth Ave. march toward the Batasan Complex in Quezon City where President Rodrigo Duterte is delivering his State of the Nation Address. PHOTO BY EDWIN BACASMAS / PHILIPPINE DAILY INQUIRER

A crowd of about 7,000 showed up on Monday at the south gate of the Batasan complex as President Rodrigo Duterte was delivering his second State of the Nation Address.

Unofficial figures from the Philippine National Police (PNP) said that as of 1 p.m. there were about 7,000 protesters who wanted to express their defiance to the President’s statements.

The rally organizers also aired the President’s Sona speech as part of their event.

Meanwhile, a crowd of about 4,000 attended the pro-Duterte rally on the other side of the complex as of early afternoon.  FM / JPV/rga