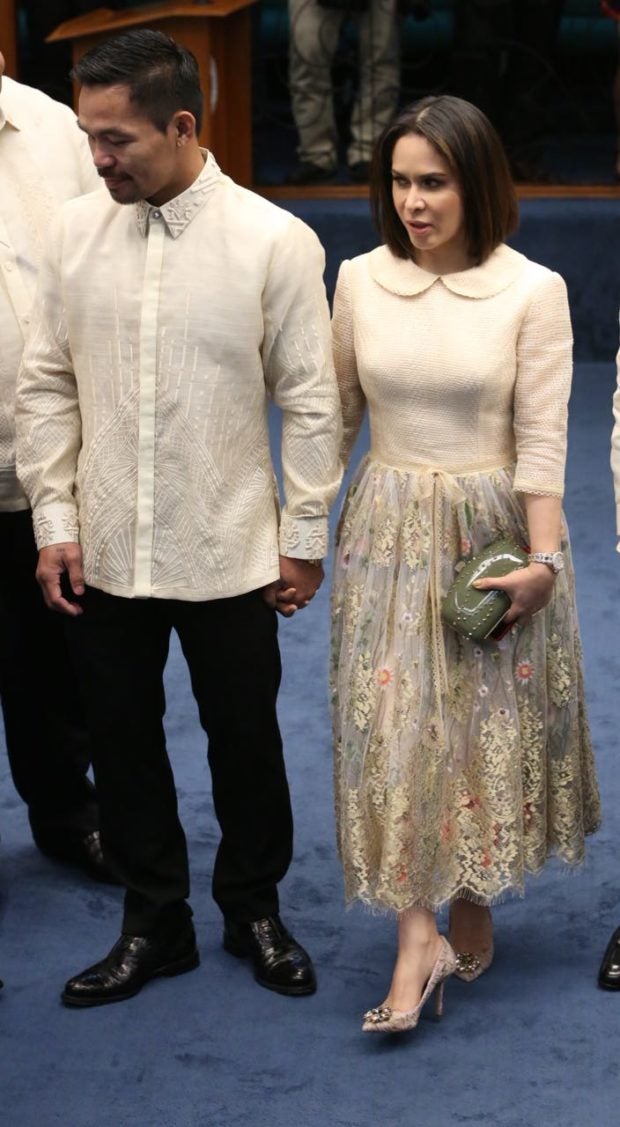 Sen. Manny Pacquiao with wife Jinky Pacquiao at the opening of the 17th Congress at the Senate. Marianne Bermudez/INQUIRER

“Daanan natin sa dasal na magkakasundo, na ‘wag mag-away (Let’s use prayers as a way to unite, no more squabbling),” Pacquiao said when asked how he could help unite the Senate, perceived by many as an institution divided by politics.

“We’re just doing our job here in the Senate para sa kapakanan ng bansa (for the sake of our nation). Kung mag-diskusyon sa floor, sa floor lang nothing personal (If ever there would be discussions on the floor, it should be limited on the floor only and nothing personal),” he told reporters ahead of the opening of the 17th Congress at the Senate.

The Senate earlier opened the second regular session ahead of President Rodrigo Duterte’s second State of the Nation Address (Sona).

Reacting to calls for a more united Senate in the next session, Senate President Aquilino “Koko” Pimentel III said the overwhelming vote of the Senate on martial law extension proves their unity.

“Isn’t that strong enough? (But) we should not silence the voice of the Senate. We should have an opposition to check the majority,” Pimentel said in an ambush interview.

Meanwhile, Senate Minority Leader Franklin Drilon said the opposition bloc in the Senate would continue to scrutinize policies the Duterte administration will propose.

“We will continue to scrutinize the policies that will be proposed through legislation to make sure that these are for the benefit of the people,” Drilon said.

Fellow minority lawmaker Senator Risa Hontiveros, for her part, said the opposition will remain faithful to its responsibility of fiscalizing the “overreaching” chief executive.

“Maasahan na iigihan namin ang pag-fiscalize kay Presidente at pag check and balance sa isang malakas at madalas, overreaching executive lalo na ngayon na napalawig ang batas militar sa Mindanao (We assure that we’ll do better in fiscalizing the President and the check and balance of a strong and most of the time overreaching executive, especially now that there is a prolonged military rule in Mindanao),” Hontiveros said in an ambush interview.

Recently, Senator Antonio Trillanes IV chided the Senate as puppets of the Duterte administration, turning the institution as a “last bastion of democracy” into mere lapdogs of Duterte. JPV/rga