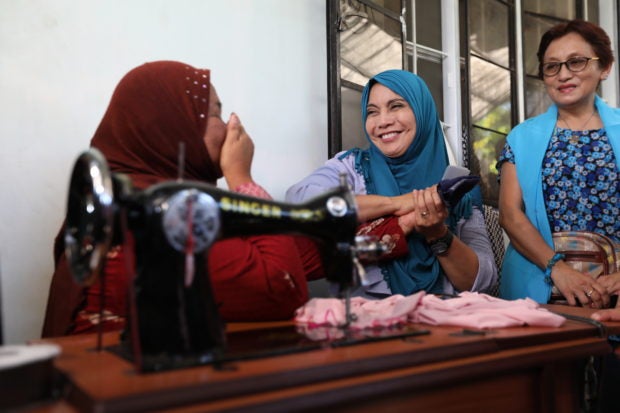 Vice President Leni Robredo in a visit to Marawi City on June 26, 2017 . (File Photo courtesy of the Office of the Vice President)

MANILA — While she appreciated Congress for allowing a Maranao leader to air her concerns about martial law on Saturday, Vice President Maria Leonor Robredo stressed the need to listen to the residents of the besieged Marawi City.

“They’re only screaming: ‘Listen to us. Include us in the discussion. We are here, ask us what’s important to us,'” Robredo said in her Sunday radio program, “BISErbisyong Leni,” aired on RMN-dzXL 558 kHz.

She made the call a day after the House of Representatives and the Senate voted 261-18 in a special joint session to extend martial law in Mindanao until the end of the year upon President Duterte’s request.

“I think it’s an important message, because in any conflict, any project, it’s important to listen to the people who are most affected,” she said.

Still, Robredo, a former lawmaker, lauded Congress for allowing Samira Gutoc-Tomawis of the Ranao Rescue Team to air her concerns about human rights violations committed against the displaced people.

During the Saturday joint session, the Marawi City resident issued a broad appeal: “Please ask us, what do we feel?”

She narrated harrowing accounts of various residents, including a 20-year-old with mental disability who was “psychologically tortured” after being forced to admit to being a Maute member, as well as men forced to walk blindfolded by soldiers.

Robredo noted: “This rarely happens. They deliberated and listened to the resource persons.”

“Her message is important. This was also the same message that, when I came down to Mindanao a few times, this was also what they wanted me to deliver,” she said.

Robredo added that allegations of human rights violations under the military rule “should be looked into so they would not worsen.”

She recalled that in a meeting with the martial law administrator, Defense Secretary Delfin Lorenzana, she already raised the concerns aired during her visit to the evacuation centers in Iligan City.

“I told him, ‘Sec, what the people there are asking for is to include them in the discussion. They’re just asking to be consulted.’ And Secretary Lorenzana promised to do this,” she said.  SFM