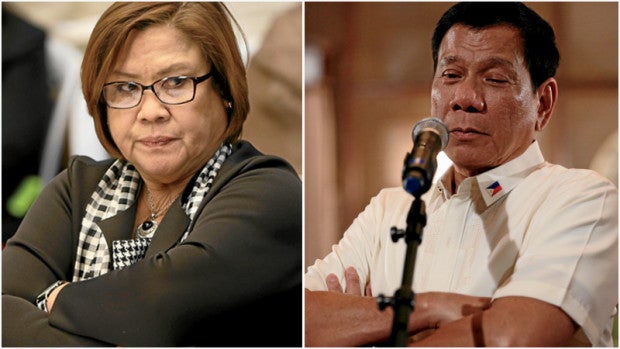 Senator Leila de Lima criticized President Rodrigo Duterte saying she expected Duterte’s 2nd State of the Nation Address (Sona) to be a litany of “fake achievements like the fake news his supporters have continued to spread.”

In a press statement Sunday, the detained senator said she expected nothing but lies and a litany justifying the extrajudicial killings.

“What will he brag about during the SONA? The killings? The lies?” she said. “Let me remind him that he has already gone beyond his self-imposed three to six month deadline that he promised during his campaign.”

Duterte’s most popular campaign promise to wage war against drugs and criminality within six months, was later extended to half a year. A year after assuming power, De Lima claimed that crimes still exist, as the administration’s war on illegal drugs yielded more murders.

“The drugs are still there. It thrived once more in Bilibid. Why? Because they allowed these drug convicts to do their thing, in exchange for testifying against me. How about the true drug lords? Were there any arrests? How about those with corruption cases, didn’t they release them?” she said.

The PNP has reported either arresting or killing alleged drug lords, including Kerwin Espinosa, who was collared in Abu Dhabi where he fled after Duterte won the presidency in 2016. He has admitted being a drug “distributor” in the Eastern Visayas.

Espinosa’s father, Rolando, was killed while detained at the Baybay, Leyte, Sub-provincial Jail. Rolando was a former mayor of Albuera town, also in Leyte.

The senator, a staunch critic of Duterte, initiated a Senate probe on the alleged link of the Davao Death Squad to the President. After high-profile drug convicts testified about her alleged involvement in the prison drug trade, the former justice secretary was charged and has been detained in Camp Crame since February. CBB/rga