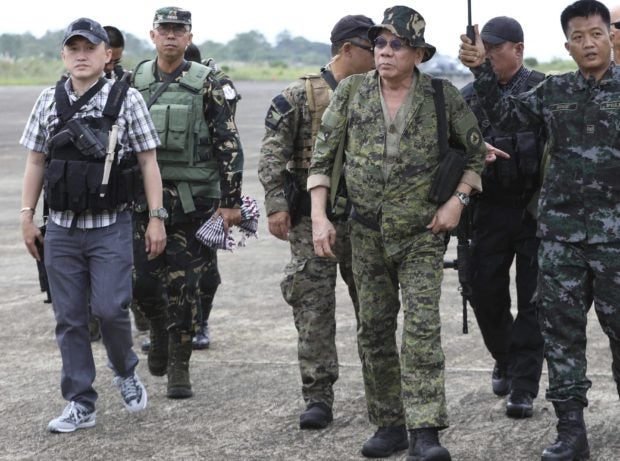 FIGHTING MOOD President Duterte in combat gear during his visit to Marawi City on Thursday. —AFP

“I do not want to talk peace,” Mr. Duterte told troops late Thursday when he visited a military camp in Marawi City, about 3 kilometers from where soldiers were battling Maute group rebels.

Automatic gunfire and artillery shelling were heard during his four-hour visit, which was kept secret for security reasons. He distributed watches, supplies and equipment.

“After you finish here, after you decimate the fools there, we will reorient. It’ll be the NPA next,” said the President, who was dressed in a camouflage uniform and combat boots.

“Because they already owe us a lot. I no longer want to talk with them. They killed many of my soldiers and police, even those who just went to the market,” he said.

The rebels responded with the attack in Guihulngan City, killing one civilian and six policemen, including the city’s police chief, Supt. Arnel Arpon.

SPO4 Jerome Delara, PO2 Jorie Maribao, PO3 Jordan Balderas and two others were wounded in the ambush at Barangay Magsaysay in Guihulngan.

Arpon and his men were responding to the report of Guihulngan City Councilor Edison Delarita that he was ambushed along with his driver and two others.

Senior Insp. Armilyn Vargas of the Negros Island regional police said Delarita was among four people targeted for liquidation by the NPA.

The NPA was also planning to attack the police station in Guihulngan as well as those in Himamaylan and Kabankalan in adjacent Negros Occidental, Vargas said.

But Col. Eliezer Losañes, commander of the 303rd Infantry Brigade  pursuing the NPA rebels, said he believed the real NPA targets were the police and their stations.

Defense Secretary Delfin Lorenzana described the recent series of attacks by the NPA as “atrocities” staged despite ongoing peace talks.

Lorenzana cited the NPA attacks in Gumaca, Quezon province, where they burned equipment owned by government contractors; the killing of a policeman in Bukidnon; the landmine blasts in Quirino province where six soldiers were hurt; the destruction of plantations in Surigao del Sur; the killing of soldiers buying food in a Palawan market; and the attack on members of the Presidential Security Group (PSG) in North Cotabato.

“We are all for peace. Who doesn’t want peace for our country?” Lorenzana asked.

“[But] we can only talk about peace when both sides mean what they say,” he said. “The treacherous communist-terrorist NPA has once again shown their utter lack of empathy [with] our suffering countrymen.”

While government peace negotiators have tried to show sincerity and integrity during the talks, Lorenzana said the National Democratic Front of the Philippines, the umbrella organization of the communist movement, “reciprocated [with] double talk and treachery.”

Presidential Adviser on the Peace Process Jesus Dureza said the attacks were the main reason the government decided to cancel informal talks set for the weekend in the Netherlands.

“I called up our third party facilitator in Norway. This is the group that supports some of the expenses and I explained we won’t pursue with the back-channel talks in the meantime,” he said.

Dureza said it was the government’s collective decision to postpone the informal talks until “the atmosphere is conducive for the peace talks.”

Dureza said “the incident in Arakan, North Cotabato, has a great impact [because] the PSG doesn’t usually engage the NPAs” and yet they were attacked.

“It’s really hard to talk with a lunatic who takes pride in extrajudicial killings,” Sison said in an online interview on Friday.

“There can be no peace negotiations if there is no armed struggle and no challenge in combat, especially if the other side is drunk with power and thinks he can just order revolutionaries to surrender,” Sison said.

On Thursday, Sison claimed Mr. Duterte was only using the communist insurgency as a pretext to extend and expand martial law because of the President’s “obsession with martial law and mass murder.”

But National Security Adviser Hermogenes Esperon dismissed Sison’s remark and suggested it was Sison who was obsessed with “armed struggle.”

“If you are the leading advocate of federalism which distributes power to the regions, are you obsessed with power and martial law?” Esperon said.

“Can we say that of Mr. Joma Sison?” Esperon asked. “Maybe Joma Sison also has an obsession. Is he obsessed with armed struggle? I don’t know. But, of course, there is democratic space for the good professor.”

The President himself seemed piqued by the public bashing he had been getting from Sison, who used to be his professor at the Lyceum of the Philippines.

“You got that right, 100 percent,” Mr. Duterte said of Sison’s earlier remark that he was bullying people. “I bully people who want to overthrow the government. That is my job.”

“I believe you, Mr. Sison. You are right. We should stop talking because you are wasting our time,” Duterte said in a speech in Davao City hours after the Guihulngan attacks.

“The war that you are talking about has been here the last 50 years. Let’s renew it for another 50 years. Let the Filipino sacrifice, the poor, the lumad. Let them die,” Duterte said.

“Let us renew the fighting for another 50 years. Anyway, all of us will not see the light of day on this revolution of yours,” he said.

Mr. Duterte repeated a claim he made months ago that “Sison is dying. He has trouble in his stomach and the Norwegian government doesn’t want to pay the hospital.”

“He won’t last long, but who will be left behind? You,” he said, addressing Mindanao tribesmen who have joined the communist rebellion. —WITH REPORTS FROM DELFIN T. MALLARI JR., KARLOS MANLUPIG, FRINSTON LIM AND REUTERS