VP: Leadership is a choice between being liked or being respected | Inquirer News
Close
menu
search

VP: Leadership is a choice between being liked or being respected 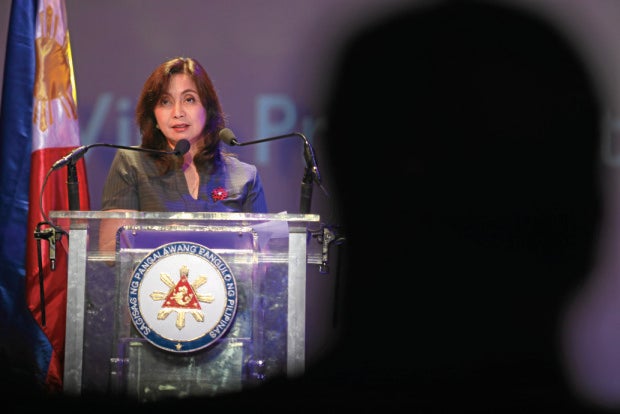 Leadership is often a struggle between doing the right thing and being popular, Vice President Leni Robredo said on Wednesday.

“It is always a choice between being liked and being respected. Sometimes, when you choose to be respected than be liked, you will have to undergo struggles first,” she told a forum with students of St. Paul College in Pasig City.

“When you make difficult decisions, you may be unpopular, but later on, you will be respected because people know that you chose the more difficult but right path,” said Robredo, whose public satisfaction and trust ratings improved in the latest surveys after taking a dive earlier this year.

She lamented how people who would make the right but unpopular choice would be “swarmed” on social media.

“Now, so many people opt to be quiet, because when they fight back, they are swarmed. I think you know what I mean. Most of you are in social media, and when you say some things that others take very personally, people swarm at you,” said Robredo.

“I have been at the receiving end of so much of that,” she said.

The titular head of the Liberal Party said the world had changed so much in recent years.

“What has become of us? If before, we could not tolerate certain things, but now there is so much that we tolerate already,” she said, apparently referring to the rise of populism and the political divisiveness on the internet.

“And you know, that is, I think, where we should decide. If these things happen, what do we do? Would we opt to take the safer route, or do we fight for what we think is right?” Robredo said.

“If you ask me, even if— again, even if it is unpopular — we always fight for what we think is right,” she said.

In March, Robredo’s popularity fell after she came under fire from administration allies for speaking out against the administration’s drug war, particularly when she sent a video message to a United Nations side event raising alarm over the killing of thousands of drug suspects.

Robredo’s remarks prompted the filing of two impeachment complaints against her by lawyers supportive of the Duterte administration, though no lawmaker has endorsed them so far.

Speaker Pantaleon Alvarez said he was still building a possible impeachment case against the vice president.

Robredo’s public satisfaction rating recovered in June, rising by 10 percentage points from her previous net rating of plus 26 to plus 36, according to Social Weather Stations.

Her trust rating rose four points from 56 percent in March to 60 percent in June, according to Pulse Asia. JPV/rga