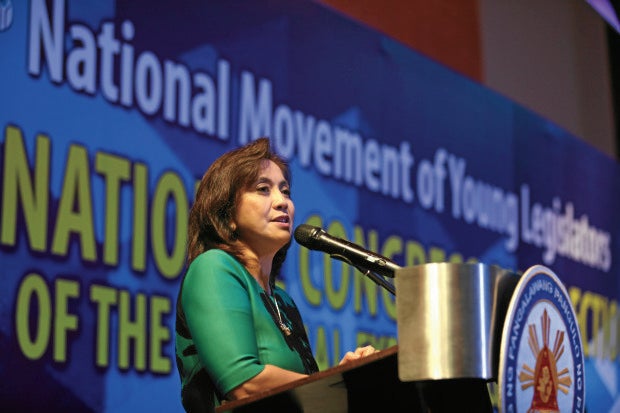 “This is the perfect time to start a campaign against lies and alternative facts,” she told a forum on social media organized by the Coalition for Better Education at the Cebu Eastern College.

“Let’s gather together an army of truth seekers, because though there are many trolls, I think there are more people who want the truth,” Robredo said in a mix of English and Filipino.

In her speech, a transcript of which was sent to Manila reporters, the former Camarines Sur representative lamented the proliferation of people spreading lies and misinformation on Facebook, Twitter and alternative news blogs.

She cited her own experiences battling hoaxes and unfounded rumors.

Some of these have included speculations of a romantic liaison with a congressman or her being pregnant, as well as her alleged links to groups plotting President Duterte’s downfall, all of which her office has sought to debunk.

“At first, we tried to take the high road. We said that ‘since it’s not true, no one will pay attention to it.’ So we tried to ignore the lies going around about myself or my office,” Robredo said.

“But in the six months since then, while we were taking the high road, while we were not responding to the lies, it began to seem like the lies were becoming truth. Because people were only reading the lies and couldn’t see the truth,” she said.

“So we realized that every time lies, fake news, or alternative facts are shared, they assume the appearance of truth,” she said.

“Shall we accept this world? That is what we must answer today… Shall we surrender the truth to those who want to corrupt it? Of course, my answer is we must not,” she said.

“The success of our democracy—and the state of our rights and freedoms—will depend on how we protect the truth,” Robredo said.

She said the people might feel powerless in the face of an onslaught of falsities and lies on social media. “But we must challenge ourselves to uphold the truth and its essential place in public discourse. We must be unafraid to debunk falsehoods, to counter fallacies, and to expose frauds who deceive our people so brazenly,” she said.

She told reporters on Friday  she would continue to voice out her stand on issues even if these ran counter to the Duterte administration.

Robredo said she believed that the “Naga Leaks” that are supposed to be an explosive expose against her by the website called “We are Collective” was only meant to silence her.

“On our part, we are ready. We have nothing to hide. We have not sinned against the country. We will continue to express our beliefs, with all our hearts and with courage no matter what they will do to stop us,” she said in Filipino.

On Saturday, Robredo is scheduled to hold a dialogue with fisherfolk in San Remegio town, Cebu, and grace the relaunching of her late husband’s book, “Jesse Robredo: The Quest for Good Governance,” at Ayala Center Cebu.

Robredo said her hopes are high that the death penalty bill would still be overturned by the Senate.

She said the reimposition of the death penalty is not an assurance that crime incidence would go down as there is no emperical data that it is a deterrence to crime.

Robredo also pointed out that the country had an “imperfect” criminal justice system which raises the possibility that the innocent may be wrongly judged as guilty.

It is also antipoor because those on death row are indigents who could not afford a good lawyer, she said.