Crackdown still on, but LTFRB in a rush to OK 11K cars 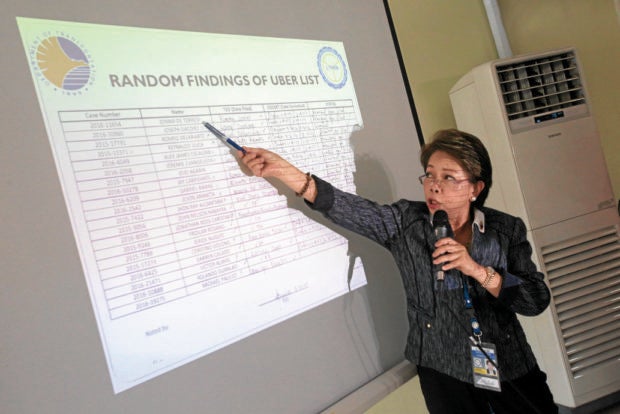 The Land Transportation Franchising and Regulatory Board (LTFRB) held a technical working group meeting on Wednesday with transport network companies (TNCs) but stood firm on its decision to push through with its July 26 crackdown on thousands of app-based drivers who will remain “colorum.”

“We are bound by our order which will become executory on the 26th,” LTFRB board member Aileen Lizada told reporters after the two-hour meeting with Grab, Uber and U-Hop representatives.

But Lizada said that should Grab push through today with its plan to appeal the LTFRB order, the board would have to put off the crackdown until Grab’s motion was resolved.

In a statement on Wednesday, Uber said it would also file a motion for reconsideration soon.

But between now and July 26, Lizada said they would be fast-tracking the processing and release of around 11,000 pending applications for franchises from TNCs.

With the approval of the pending applications, Lizada said the number of drivers with valid franchises may be enough to cover the demand for ride-sharing services.

According to Lizada, the LTFRB was told by the TNCs that the ideal number of transport network vehicle services providers, especially during peak hours, was around 15,000.

For Transport Undersecretary Tim Orbos, there is indeed a need for ride-sharing services but the operations of TNCs should be within the bounds of the law.

“We are a government that is ruled by laws. There are certain rules we need to follow. We know we have a problem in our public transport [systems]. But it does not mean that we will bend the rules for them,” he said.

Orbos noted that in the first place, the TNCs should have informed their drivers that the LTFRB had imposed last year a moratorium on accepting franchise applications.

“There were several concerns that needed to be addressed such as issues on accountability and surge pricing. We also needed to know [if there were enough ride-sharing vehicles],” he said. “If they want to operate in the Philippines, they need to be governed by laws.”

On Tuesday, the LTFRB complained that it was unfairly being painted as the villain,  adding that it was Grab and Uber who created “a mess” when the TNCs failed to inform their driver-applicants about the moratorium.

It added that the TNCs also did not stop accepting applications despite the moratorium and failed to tell their drivers that they needed to go to the LTFRB to get either a provisional authority (PA) or a certificate of public convenience (PA).

Currently, there are only over 3,700 Grab and Uber drivers who hold a PA or CPC.

On Wednesday, the LTFRB opened a one-stop shop for app-based drivers whose PAs or CPCs were set to expire by the end of the month.

Lizada called on Uber and Grab drivers to visit their offices so that they could check on their applications or file a motion for reconsideration if it was denied.

She said that among the reasons for denial were incomplete documents or the applicants’ failure to appear before the LTFRB.

Earlier, the transport board noted that there were around 56,000 drivers from both Grab and Uber.

Apart from apprehending colorum vehicles starting on July 26, the LTFRB will also meet on the same day with the TNCs to determine the “proper number” of app-based drivers that should be given franchises to operate.

Lizada noted that this was also to ensure that while TNCs serve the riding public, they would not further worsen road congestion in the metropolis and affect their own earnings  because of stiffer competition.