Manila students slam Duterte in rally ahead of 2nd Sona 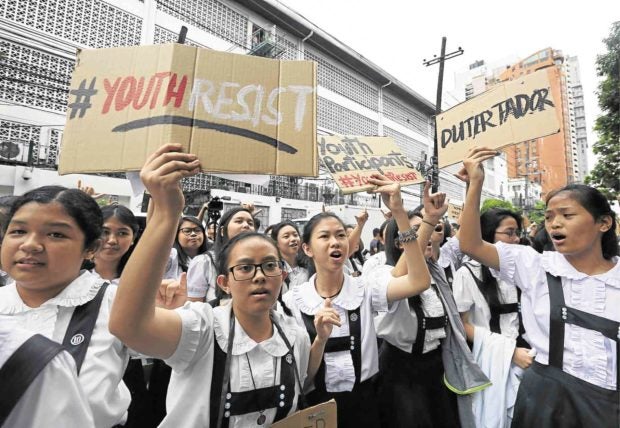 With nothing but placards and their voices, high school students in Manila gathered on Tuesday to speak out against the “mysogynist and abusive” Duterte administration, days before the President’s second State of the Nation Address.

“Why do we let them abuse their power?” asked Shibby de Guzman, 13, one of the speakers in the rally organized by St. Scholastica’s College. De Guzman earlier took a bashing online from pro-Duterte netizens for being vocal against the spate of extrajudicial killings (EJKs) attributed to the government’s war on drugs.

Sister Mary John Mananzan, an activist nun now serving as vice president of the Benedictine-run institution, said the activity was in line with the school curriculum to keep students aware of sociopolitical issues. “It’s part of their education,” she added.

“It’s the weak against the strong,” Mananzan said, pointing to the  girls who may  be considered among the youngest critics  of the year-old Duterte presidency which currently enjoys a high approval rating in opinion polls.

In a videotaped message that was played during the program, De Guzman said: “Today I want to fight the dictatorship.”

Later in a speech, she asked: “Why do we allow the police or vigilantes or whoever to kill people just like that? … Why do we allow taking another life to be the new normal?”

“Today we are asking these questions with the loudest voices, the loudest protest,” the student said. “A lot of people have asked how many people will be here today. The answer is we are more than enough to stand against the misogynistic, power-abusive administration.”

Held in front of St. Scholastica’s campus on Leon Guinto Street, the protest action involved around 200 students from Grades 9 to 11.

“The youth is watching,” read the placard held by Summer Cello, an 11th grader. “We have to make a stand because in the end, we are the ones who will fix whatever problem they (present leaders) will leave behind,” the 16-year-old said.