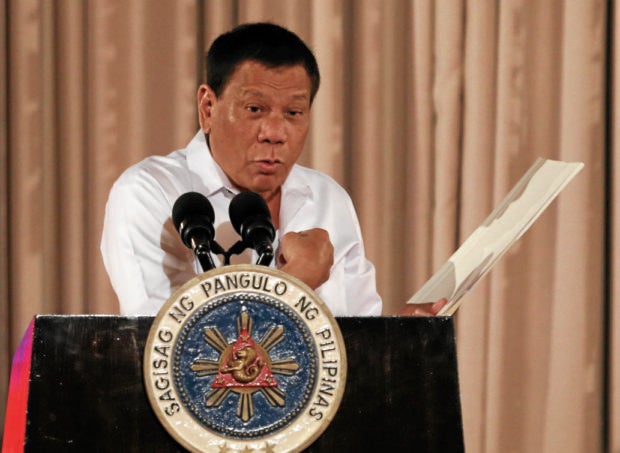 Mr. Duterte, in trying to convince lawmakers to extend martial law in Mindanao until the end of 2017, said terrorist elements and rebels were getting reinforcements from local and foreign sympathizers with links to the Islamic State (IS), or Daesh, in the Middle East.

In a July 18 letter to Speaker Pantaleon Alvarez and Senate President Aquilino Pimentel III released to media by House Majority Leader Rodolfo Fariñas, the President officially asked Congress to prolong the period of martial law, as he sought to explain the gravity of the crisis in Marawi City and the threat it might spill over to the rest of the troubled region.

Hanilon has directed remnants of the Ansarul Khilafa Philippines to conduct bombings in vital areas in Mindanao, including Lanao del Norte, the report said.

Foreign terrorist fighters “have shown active support” for the local rebels by coming to the Philippines as reinforcements, including 20 Indonesians who joined battle in Marawi City, it added.

Mr. Duterte said he came to the conclusion that the rebellion in Mindanao would not be quelled completely by July 22, the last day of the 60-day period of martial law mandated under the 1987 Constitution.

He said he reached this understanding “upon a thorough personal assessment of the current situation in Marawi City and other parts of Mindanao, and taking into account the reports and recommendations” of the Armed Forces of the Philippines and the Philippine National Police.

“For this reason, and because public safety requires it, I call upon Congress to extend, until Dec. 31, 2017, or for such period of time as the Congress may determine, the proclamation of martial law and the suspension of the privilege of the writ of habeas corpus in the whole of Mindanao,” he said.

Mr. Duterte placed Mindanao under martial law on May 23 following the siege of Marawi City by armed militants from the Maute group,  the Abu Sayyaf and the Bangsamoro Islamic Freedom Fighters, which were inspired by IS.

The report said, among other things, that:

*  The AFP’s operations have neutralized 379 of 600 rebels and recovered some 329 firearms, but IS-inspired groups “continue to offer armed resistance in Marawi City and other parts of Western andc Central Mindanao.

*  Parts of Marawi, encompassing four barangays, are still under the control of the militants, who have holed up in mosques, hospitals and other structures.

*  Of 279 individuals ordered arrested on May 29 and June 5, only 12 have been neutralized or captured. “The AFP is further set to recommend the issuance of another arrest order for some 200 other individuals,” the report said.

*  The rebels have been found to possess high-powered and military-grade weapons, such as rocket-propelled grenades and a large supply of ammunition.  “Private armed groups and supporters of some sympathetic local politicians are likely to continue extending their assistance” to the rebels.

The rebels, according to the report, are also being provided resources by foreign sympathizers like Malaysian fugitive Mahmud bid Ahmad, who was believed to have planned and financed the Marawi siege and with reported links to IS.

The report said the fighting in Marawi City introduced a new type of urban warfare characterized by total disregard of civilian lives, cruelty to combatants and non-combatants, and widespread looting and pillaging.

“This type of urban warfare has caused a significant number of casualties on both sides and huge destruction of property, both public and private; more importantly, house-to-house firefights have slowed down the advance of government forces and their mopping-up operations,” it added.  SFM