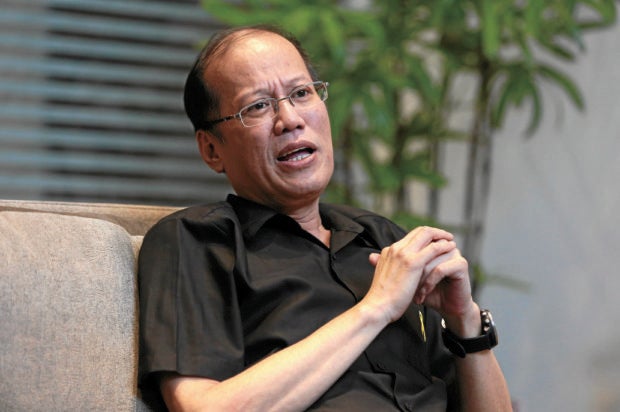 Justice Secretary Vitaliano Aguirre II on Wednesday described as “weak” the cases to be filed by the Office of the Ombudsman against former President Benigno Aquino III over the Mamasapano encounter in January 2015.

In an ambush interview, Aguirre said cases of usurpation of authority under Article 177 of the Revised Penal Code and violation of Section 3 (a) of Republic Act 3019 or the Anti-Graft and Corrupt Practices Act against Aquino are both bailable.

“Masyadong maliit nga ‘yun (That’s too petty). As a matter of fact, we know that those are bailable cases with imprisonment of probably less than six years,” he told reporters.

The complainants in the case – the families of the 44 SAF commandos killed in the encounter – questioned the Ombudsman’s findings and insisted on their original complaint for reckless imprudence resulting in multiple homicide against Aquino and Purisima.

“In fact, that was exactly his (Napeñas’) defense – that the liability was with higher officials and he was only following their orders,” he pointed out.

Prior to his appointment in the Department of Justice (DOJ) last year, Aguirre served as lawyer of Napeñas – a relative – during the Senate inquiry and in succeeding criminal charges against the former police general.

Napeñas, who was in the DOJ Wednesday, echoed Aguirre’s views.

“Medyo mahina talaga (It’s really a little weak),” he said in a separate interview when asked for reaction to the Ombudsman’s findings.

Napeñas, who was already charged with the same offenses with Purisima before the Sandiganbayan earlier, welcomed the anti-graft office’s conclusion that Aquino has criminal liability over the encounter.

“It is based on evidence and witnesses at hand. If the Ombudsman files the case, that means there’s enough basis,” he told reporters.

The former police general also welcomed the proposal to reopen the Senate investigation on the Mamasapano encounter following the Ombudsman’s findings on Aquino’s criminal liabilities.

“We should ask PNoy about his role because he was in Zamboanga at that time. We should find out his liability and why he did not provide help to the SAF the entire day of our operation,” he suggested, recalling the observation by senators in earlier Senate inquiry that the casualties could have been minimized if only the government sent reinforcement to the SAF troopers.

Asked to comment on Aquino’s claim of innocence, Napeñas said it would be best to let the people decide.

Read Next
70 new immigration officers hired to cut down long queues at Naia
EDITORS' PICK
Geek out at TOYCON 2022 powered by Smart Signature
Unemployment rate up to 6% in May
Bye bye Boris: UK PM Johnson bows out with regrets but no apologies
House energy committee chair Arroyo bats for cheap electricity
High inflation: Your P1 is now worth only 87 centavos
High-risk pregnancy: Reducing your risk is in your hands
MOST READ
Suspect in grisly killing of missing woman in Bulacan arrested
Kim Atienza’s daughter flaunts bikini body in response to critics of her ‘revealing photos’
Bongbong Marcos’ first order: Abolish PACC, Office of Cabinet Secretary
Ex-Defense chief Lorenzana is the new BCDA chair
Don't miss out on the latest news and information.