President Rodrigo Duterte has submitted to Congress his report to justify the extension of martial law in Mindanao until the end of 2017.

In the letter, Duterte justified his request to extend his martial law decree until the end of 2017 because the threat of terrorism in Mindanao continues even beyond the 60-day period of martial rule, due to the continued presence of terrorist groups in Mindanao – the Da’watul Islamiyah Waliyatul Masriq (DIWM) Islamic State-inspired elements of the Maute and Abu Sayyaf; the Ansarul Khilafah Philippines; and the Bangsamoro Islamic Freedom Fighters.

Duterte said the Maute group’s attack in Marawi city has introduced an evolving type of “urban warfare,” that may spill over to the other nearby provinces.

“Indeed, the crisis in Marawi city has introduced a newly evolving type of urban warfare – one that is characterized by the rebels’ total disregard for civilian lives, cruelty to combatants and non-combatants alike, and widespread looting and pillaging of occupied communities,” Duterte’s letter to Congress read.

“This type of urban warfare has caused a significant number of casualties on both sides and huge obstruction of property, both public and private,” it added.

The President said martial law needs to be extended until the end of the year because the threat of rebellion persists, calling on Congress to help him preserve the integrity of the Republic.

“Despite the progress and significant strides that we have achieved against the DIWM and its sympathizers, however, the rebellion persists and a lot more remains to be done to completely quell the same and bring back the public order and safety in Mindanao,” Duterte told Congress. 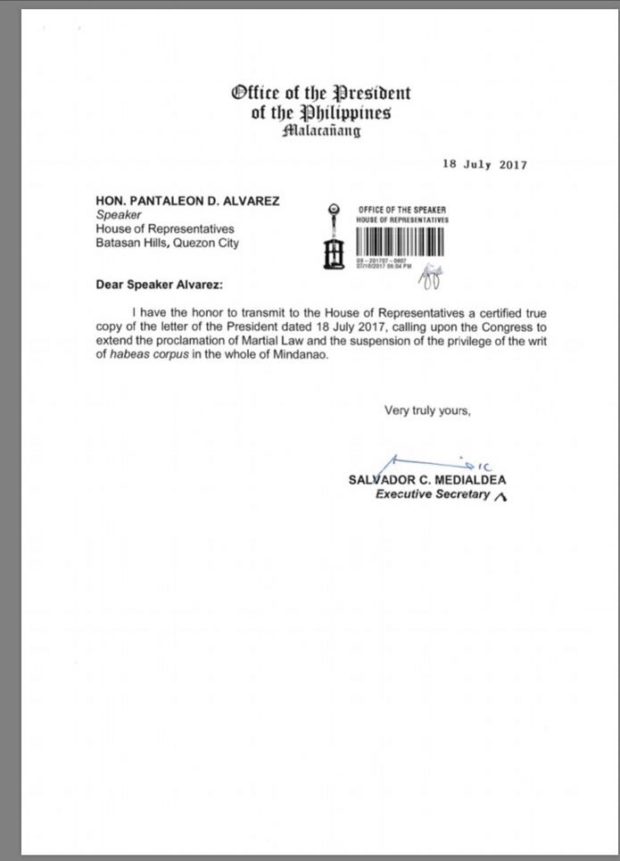 “For all of these reasons, and as public safety clearly requires it, the proclamation of martial law and the suspension of the writ of habeas corpus in the whole of Mindanao need to be extended until 31 December 2017, or for such period of time as the Congress may determine. I request the continued support of both Houses of the Congress to achieve our common goal of protecting and preserving the integrity of our Republic,” he added.

Duterte also reported to Congress the existence of a drug production facility in the Marawi city rebel stronghold, “indicating that the rebellion was drawing funding support from illegal drug syndicates.”

The military arrested nine individuals, recovered five firearms, and seized 11 kilos of shabu estimated at P250 million and clearing operations the AFP was able to recover P75 million in cash and cheques from a house in Marawi, Duterte said.

The President added that of the 279 personalities ordered arrested by the martial law administrator, only 12 have been arrested or neutralized, excluding the 200 more individuals whom the military has recommended arrested.

Duterte also noted that around 1,722 civilians of Marawi have already been rescued and that 16 barangays have also been declared “clear of DIWM presence” due to government efforts. 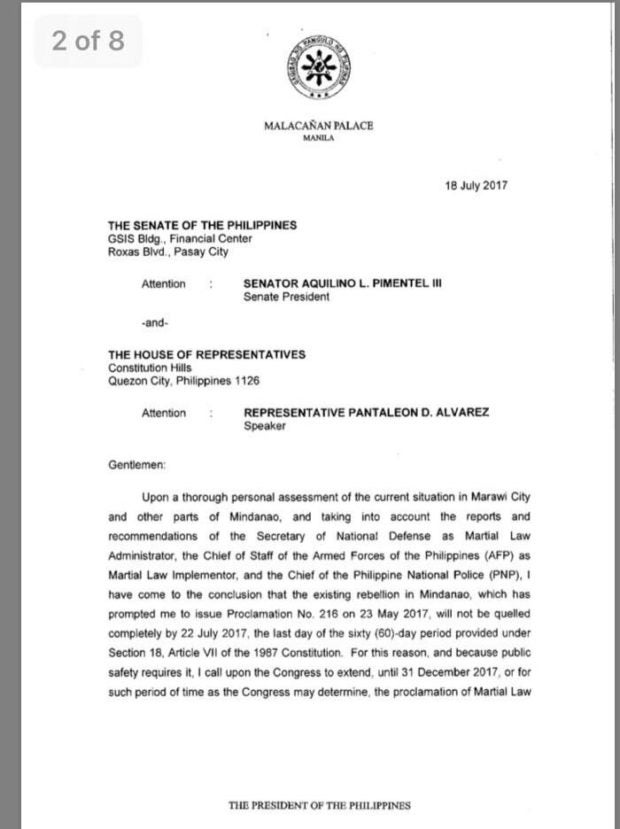 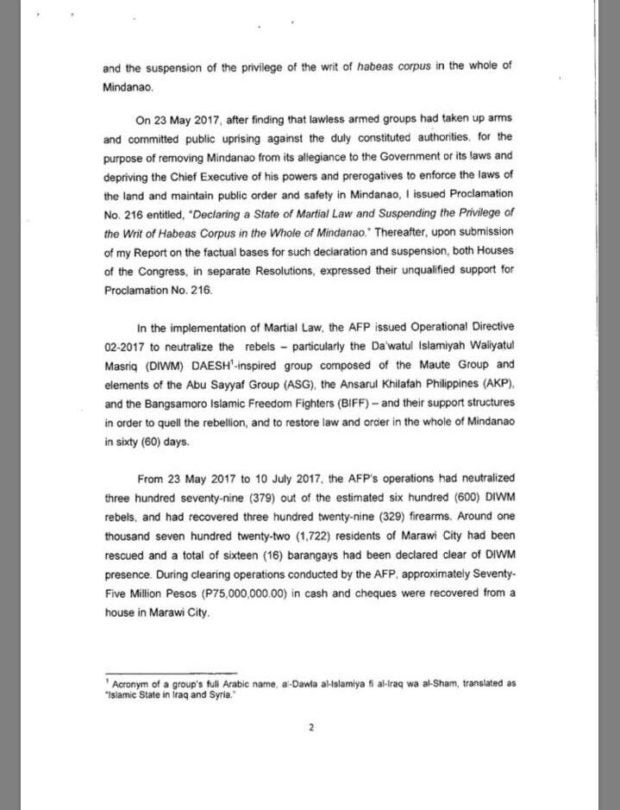 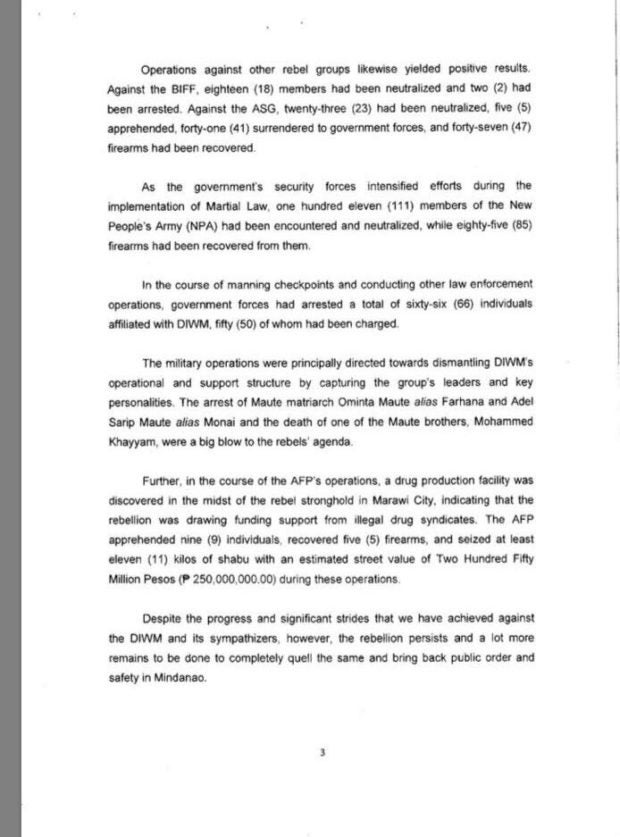 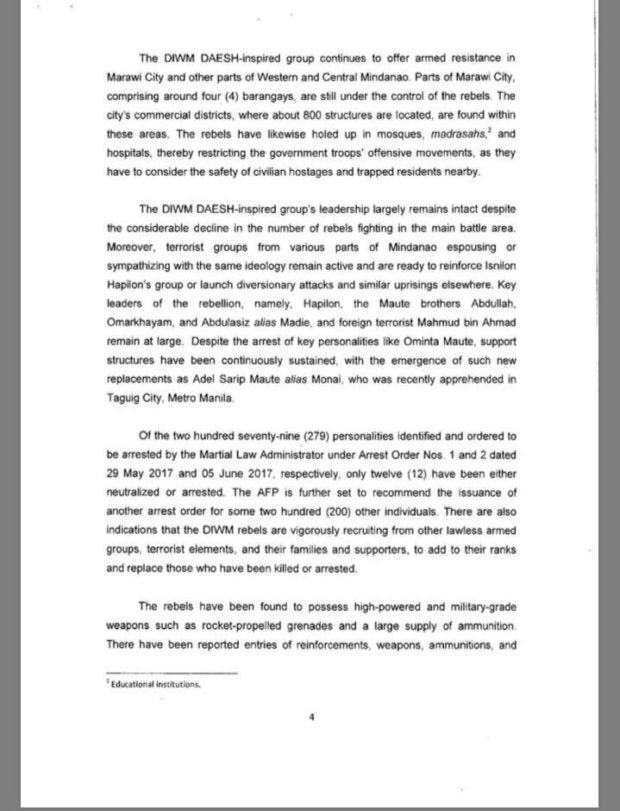 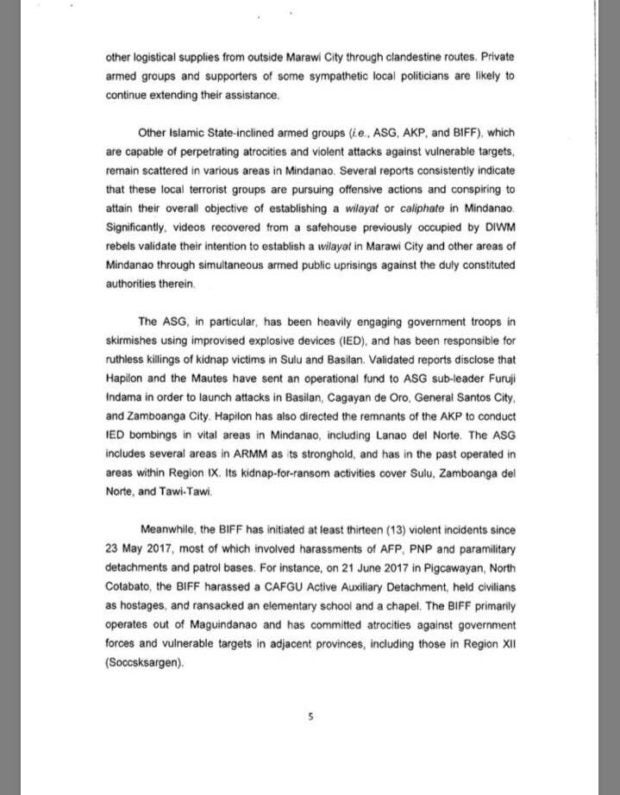 The President, however, claimed that the terrorists continue to possess reinforcements, weapons, ammunitions, and other supplies from outside Marawi.

“The rebels have been found to possess high-powered and military grade weapons such as rocket-propelled grenades and a large supply of ammunition. There have been reported entries of reinforcements, weapons, ammunitions, and other supplies from outside Marawi City through clandestine routes,” he said.

The President suspected that armed groups and supporters of local politicians are the ones who are aiding the rebel groups.

Duterte said these ISIS-inspired groups are the ones behind the improvised explosive devices (IED) bombings against military troops, as well as the multiple cases of harassments, ruthless killings of kidnap victims, and other violent incidents.

The President stressed the urgency of his martial law extension request because of the support extended even by foreign terrorist groups.

Some 20 Indonesians were identified as joining the battle in Marawi City, Duterte said, accusing fugitive Mahmud bin Ahmad of planning and financing the siege happening in the war-torn city

The Armed Forces of the Philippines (AFP), according to Duterte, however, is still in “Phase 2” of clearing Marawi City from terrorist groups.

“As may be noted, the AFP is still in Phase 2 of Operational Directive 02-2017. Phase 3, which involves support to the infrastructure development of Marawi City is yet to be initiated, considering the continuing volatile situation in the city and nearby areas,” he said.

President stressed the need for an “enhanced security-based operation” in order to help the war-torn city of Marawi recover from its damages.

“An enhanced security-based operation would certainly facilitate the early recovery, rehabilitation, and reconstruction of Marawi city and restore public order and safety in the region.

In the cover page, Duterte said his request to extend martial law stemmed from a “personal assessment” on the situation in strife-torn Marawi.

The President placed the whole of Mindanao under martial law last May 23 because of the on-going armed conflict between government forces and ISIS-linked Maute group happening in Marawi, which will lapse on July 22 under the Constitution’s 60-day prescription. with Airei Kim Guanga, INQUIRER.net intern 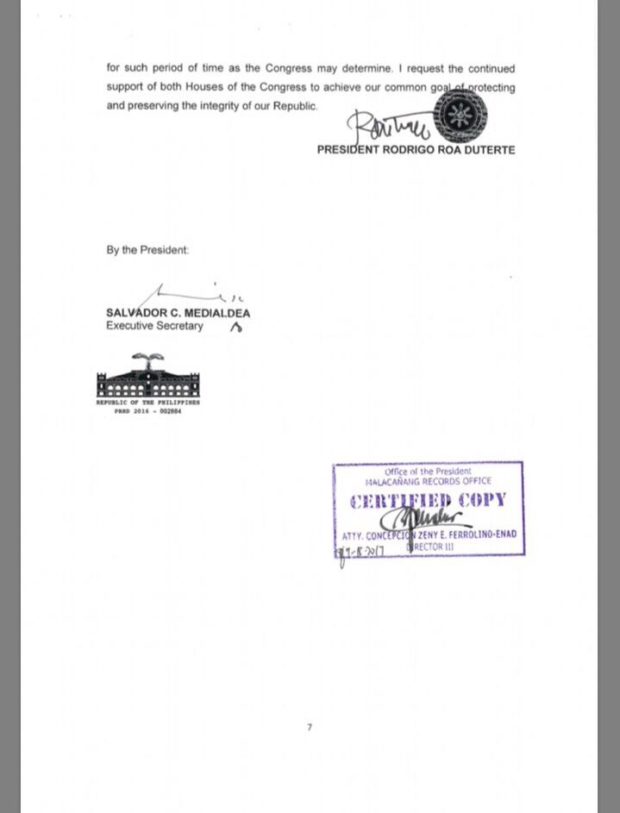